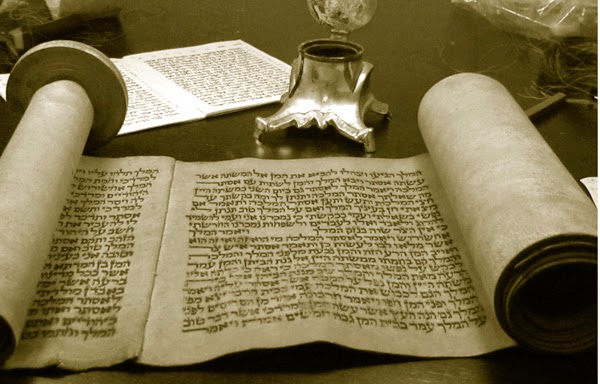 The composition of the Old Testament canon is a process that took over a thousand years. Its current order is much more based upon theological chronology and event-historical chronology than oral transmission chronology, even within the books themselves. For example, the Song of Miriam (Exo. 15:1-8), and the Song of Deborah (Jdg. 5) probably go back to the 12th century BC as written and oral transmission, even while the books in which they are contained are centuries younger.

Within the Old Testament canon, there is a tripartite division (three collections), which has been accepted in Judaism as well: the Law (Torah) consists of the first five books of the Pentateuch. The Prophets (Nebiim) are subdivided into the Former Prophets (Joshua, Judges, Samuels, and Kings) and the Latter Prophets (Isaiah to Malachi, but excluding Lamentations and Daniel). The Writings (Ketuvim) consist of all the remaining books not found in the other categories. Together these three collections bind 24 books, although the number has sometimes been given as 22 in correspondence to the number of letters in the Hebrew alphabet.

When I say that the order the Old Testament has a theological chronology, what I am suggesting is that its order leads us not only into an appropriate encounter with God, but also leads us into how we ought to know God, and how we ought to walk with God. In this way, the Old Testament becomes a blueprint of the Halakhah (the way to walk with God, as revealed through oral and written tradition). From Genesis to Malachi the Old Testament systematically facilitates answers to life’s most important questions: ‘Who am I?’, ‘How did I get here?’, and ‘How do I live my life?’ In this sense, the story from the Haggadah (Deut. 26:5-10) proves to be the first climax of the Old Testament that will continue to be reinforced throughout song and praxis in its remaining chapters and books.

Genesis, the first book of the Law and proper in name, begins by proclaiming to man the answers to his questions, ‘Who am I?’, and ‘How did I get here’. According to the Yawhists and Priestly writers, man comes from God and exists because God is pleased for him to exist. From the story of the Garden of Eden it tells us that because man cooperated with sin, rather than with virtue, he had to begin a journey through which God would eventually restore him to that which was originally promised. The remainder of Genesis and through Deuteronomy chronologically describes that earthly journey to the earthly Promised Land; and is abbreviated in the Haggadah.

While Deuteronomy concludes the first physical journey, Joshua opens the second division with the fulfillment of God’s promise to give His people their own land, and the remainder of the historical section (Joshua through Maccabees) of the Nebiim will deal with narratives about the Israelites’ struggles and successes in their spiritual journey – the Halakah. Following Maccabees enters the Wisdom literature (Job through Sirach) of the Ketuvim. This collection will offer a fresh perspective on the Halakah outside of the thoughts of prophets and priests. It will answer more daily and practical questions, such as how to deal with loss, suffering, children, enemies, women, power, alcohol, wealth, poverty, and more. The Wisdom collection is ordered generally according to the time they were last edited, with the exception of the Song of Songs, which is probably older than Ecclesiastes. Lastly, the Later Prophets close out the Old Testament Canon by offering a historical commentary according to their loyal service to God, and each addressing particular themes of the Halakah (e.g. sins and prophesies). These collections of books are ordered according to the time that they were probably written.

When Does Accommodating People Become A Sin?