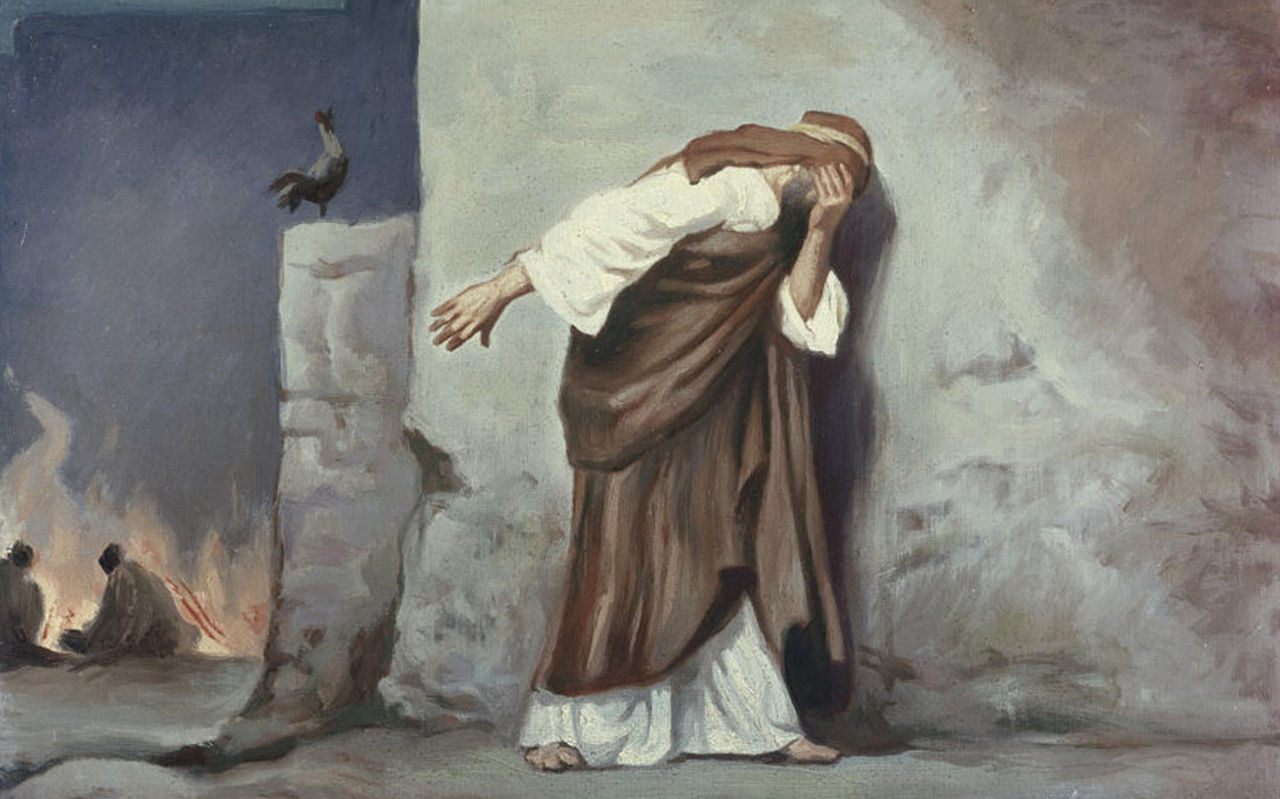 There is so much to reflect upon in the Passion of Christ and the events leading up to it! In my book Cooperating with God: Life with Cross, which follows the life of Christ Jesus from His Baptism to His Appearance to the Apostles, I spent ten whole chapters on just that one section. The excerpt below comes from Chapter Twelve (Simon Peter & the Apostles’ Denial), and it discusses the challenges that we encounter when we attempt to discern with our emotions, with the cock crowing being a sign of disobedience in our life.

THE CHALLENGE OF DISCERNING WITH EMOTIONS

All of the Gospels are consistent in saying that the first person to question Peter about his relationship with Jesus the Galilean was the maid. Mark elaborates further in telling us that this maid was in the service of the high priest, and John’s position is that the maid was also a gatekeeper. There is no agreement about who the other two quidnuncs were, which, again, serves as a warning to us that the search for meaning in this Didactic Mystery cannot be found in that little detail, and neither can it be found in exactly how many times the cock crowed.

In totality, these Gospel accounts tell us two things, which people often take out of context. The first is that the Lukan version of our Lord’s prophecy held up. That is, Peter never denied Jesus as Messiah or as the Son of God (his faith never failed) – rather, he only denied that he knew Him. “I tell you Peter, before the cock crows this day, you will deny three times that you know me.” Denying that Jesus is who He says He is, and denying that we know Him, are two completely different confessions! The second is that Peter is not the pusillanimous, scared, and bumbling idiot that I grow so weary of hearing so many Christians portray him to be. Neither was he on the run after cutting off Malcus’ ear. On the contrary, Peter was not off in some dark shadow, peeking around the corner. He was out in the middle of the well-populated courtyard and next to lit fires with Temple guards right next to him. In fact, one of the slaves that he was sitting next to was a relative of Malcus and was also a part of the mob that went to arrest Jesus at Mount Olives.

Obeying his emotions, rather than Jesus’ command, Peter went to the Temple in the company of at least one other disciple. At this point, Peter was just trying to discern the situation, as Scripture says, “he [[Peter]] sat down with the servants to see the outcome.” That Peter was efforting to discern with emotions, rather than through them, is clearly evident in light of examining his conduct during this period of desolation.

Peter’s dilemma reminds me of the time when I was in the Auckland, New Zealand airport and my three pieces of luggage were still at the airport in Sydney, Australia. It was May of 2003, and I must have looked flustered, frustrated, and fussy as I stood there in sheer bewilderment after flying for twenty-four hours and now in a strange country with no idea where my luggage was. Then some sort of airport security official approached me and started asking me a number of questions that had absolutely nothing to do with my missing luggage. I clearly remember that all of my answers to his questions were intentionally short and dismissive. I wanted to respect his interest in me, but I also had a need to get to someone who could answer my questions. I remember thinking to myself, ‘Does this guy really think I’m a terrorist? Why is he bothering me? Can’t he see that my missing luggage is the key concern here?’ Back then, this was the type of situation that qualified as ‘high-level’ suffering for me; basically, this was as bad as it got; some low-ranking hourly-wage-worker questioning ‘David L. Gray’ about nothing important, when the security of my property was at stake.

Therefore, I feel Peter’s pain and frustration. Here he was just trying to discern his situation and figure out what was going to happen next, while miscellaneous people kept asking him questions that had nothing to do with his most pressing questions of the hour. It had to be annoying, and that is probably why he kept moving around the Temple area; trying to find a quiet place to figure this situation out. That he was trying to think this whole thing through on his own is evident by the fact that he was not the one asking the questions outside of himself, but rather it was others who were disturbing him with their questions.

Peter’s emotional state aside, the one troubling area about his confession of not knowing Jesus was how it relates to the Jewish moral theology of that time, which posits that, during times of persecution, a private denial was less serious than a public one, and an evasive denial was less grave than an explicit one. If we look at the Gospels collectively, we could say that Peter’s three denials hit the bulls-eye on all four; that is, they were collectively private, public, evasive, and explicit, but because none of the Gospels agree in detail, my following treatment will be brief.

In the Matthean and Marcan accounts of the first denial, Peter is either just playing naïve or is completely distracted. He honestly did not seem to know what the maid was talking about, probably because his head was somewhere else entirely. “I neither know or understand what you are talking about.” While his first denial was evasive, his second one was simple, “Once again he denied it.” While his first and second denials were private, his third denial was public (more than one witness) and was made with an explicit vow, “He began to curse and swear, “I do not know this man about whom you are talking.” In Luke, Peter is evasively warm and naïve in response to his inquisitors: (1) “Woman, I do not know Him;” (2) “My friend, I am not;” (3) “My friend, I do not know what you are talking about.” While his second denial could be considered to have been explicit, none of them were public. In John, we see Peter’s dismissive, public, and explicit denials of “I am not,” in contrast with the “I am” admissions that Christ Jesus confessed not long before.

Not many hours ago, Peter had promised to Jesus that he was prepared to go to prison and die with Him, but when the opportunity arose to make good on his confession and be thrown into the fire with Jesus, he suddenly backed out. I remember the letters that I received from the woman after I began serving my prison sentence. In those letters for the first couple of years, she promised to never leave me, that she would always love me, that nothing would tear us apart, and so on and so on. By 2006, she was angry and confused, but promising never to divorce me while I was in prison – “That would be wrong,” she wrote. In 2007 she clearly informed me that our marriage had ended the day that I went to prison. Then in 2008, she told me that we never really had a marriage, that she did not love me anymore, and that she was filing for divorce. Finally, in 2010, after she had gotten her civil divorce and I was Petitioning the Church for an Annulment, she told me that she was not going to participate in the Annulment process because she believed that it would make her complicit in saying that we were never really married. I laugh every time I tell that story, but again, whenever we make promises outside of the Circle of Grace, we prophesy what we are absolutely incapable of fulfilling on our own.

Not many years ago, after hearing Jesus’ first prophecy about His Passion, Peter took Jesus aside and rebuked Him (Cf. Mt. 16:21-23). Now, while in the Second Degree of the Ascent to Perfection, Peter offers to forsake his own life along with the Messiah’s! It was a great sign of maturity that Peter moved from trying to hinder God to offering sacrifices to God, but it would not be until he received the gifts of the Holy Spirit and advanced to the Third Degree that he would finally understand that Jesus did not desire him to stop His Passion or even sacrifice his own life at that time. All that Jesus demanded from Peter (and, likewise, demands from us) was for him to do what God the Father had asked him to do on Mount Transfiguration. “This is my beloved Son. Listen to Him” (Mk. 9:7). “Sacrifice and offering you do not want: but ears open to obedience you gave me” (Ps. 40:7). We do see Peter’s new maturity on display in Acts, where after the Sanhedrin had ordered him and the others not to “Speak or teach at all in the name of Jesus” (Acts 4:18), but Peter boldly tells them, “We must obey God rather than men.” The cocks’ crow is the call to obedience.

Does Your Belief On Baptism Line Up With The Early Church's Belief?