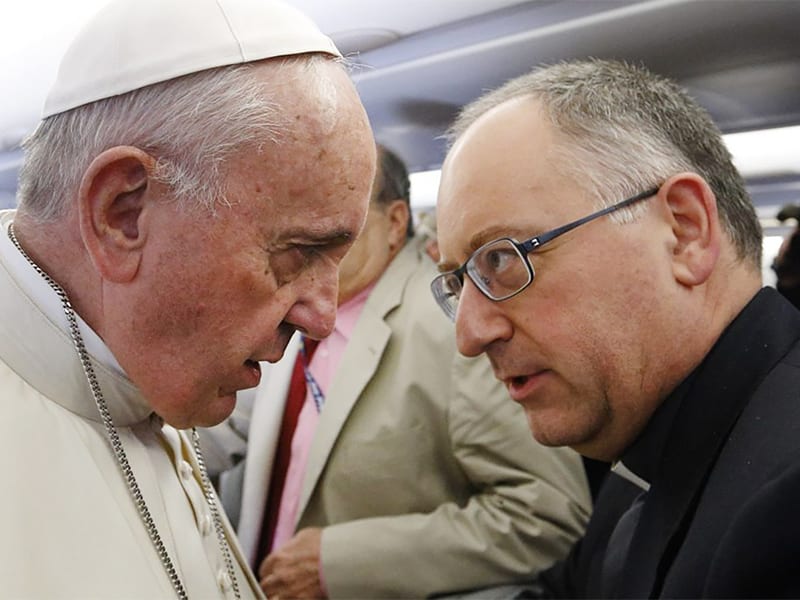 You know it’s gotten substantially worrisome when you get an email-blast from the heretical and dissenting Catholic organization Call to Action stating how encouraged they are “by Pope Francis’s remarks in his interview with Rev. Antonio Sporado, S. J.” Actually, it was a very insightful interview (download PDF here), and very well done by Father Sporado. It provides one with a great depth of insight and clarity into the beautiful charism of our Pope Francis. If you read some of his answers to a number of very good questions asked of him, you can finally come away with the answer to ‘why’ does Pope Francis operate as he does as the Supreme Pontiff of the Universal Church.

On the right hand, there is the empirical man – the total life experiences of Jorge Mario Bergoglio – all that he has learned over the course of the being a religious man in the world – the total sum of all of this successes and failures and what he did and did not learn from them. On the left hand is the Catholic Church that his heart has watched from afar, even if physically close, for his entire life.

So, what happens when a man takes his total life experience into a new job? What happens when his worldview and beliefs of how a thing should be (based upon those life experiences) come into direct conflict with how a thing have been – been, based upon the expressed worldview and beliefs of his predecessors that shaped the current Catholic ethos? The answer to these questions is what has created the impetus of the Catholic Reformation of Pope Francis. This is not a theological reformation. Pope Francis believes all that the Church teaches. On the contrary, what Francis wants to reform and reformulate is the praxis of our faith in how we weigh, measure, and dispense the preaching of the word, the performance of the Sacraments, and the exercise of charity.

The Papacy and Reformation of Pope Francis will be exercised through three windows. I call them windows because we generally know what we are throwing out of windows, but we don’t always know is what comes in through them when we aren’t looking. The first window is called Rejectionism; the second is Indifferentism, and the last is Inclusivism. Indeed, the Church may be long overdue for a healthy dose of Pope Francis’ rejection of luxury, excessive comfort, and unnecessary spending. We will also benefit greatly from the inclusive nature of our Holy Father. Perhaps we haven’t had a better big net fisherman in the Petrine Ministry since Saint Peter himself. Yet, where the people of Christ may suffer greatly from the Reformation of Francis is in regards to his indifference towards the evil of moral relativism.

The dogmatic and moral teachings of the church are not all equivalent. The church’s pastoral ministry cannot be obsessed with the transmission of a disjointed multitude of doctrines to be imposed insistently. Proclamation in a missionary style focuses on the essentials, on the necessary things: this is also what fascinates and attracts more, what makes the heartburn, as it did for the disciples at Emmaus. We have to find a new balance; otherwise even the moral edifice of the church is likely to fall like a house of cards, losing the freshness and fragrance of the Gospel. The proposal of the Gospel must be more simple, profound, radiant. It is from this proposition that the moral consequences then flow.

I say this also thinking about the preaching and content of our preaching. A beautiful homily, a genuine sermon must begin with the first proclamation, with the proclamation of salvation. There is nothing more solid, deep and sure than this proclamation. Then you have to do catechesis. Then you can draw even a moral consequence. But the proclamation of the saving love of God comes before moral and religious imperatives. Today sometimes it seems that the opposite order is prevailing. The homily is the touchstone to measure the pastor’s proximity and ability to meet his people, because those who preach must recognise the heart of their community and must be able to see where the desire for God is lively and ardent. The message of the Gospel, therefore, is not to be reduced to some aspects that, although relevant, on their own do not show the heart of the message of Jesus Christ.

Much like the whole interview, these three paragraphs are a beautiful perspective of how the faith should be transmitted. The only problem is that the leader of the Universal Church not only said it but is practicing it. Again, when a person takes their total life experience as being universally true for all, then imposes it, what you get is the Reformation of Pope Francis.

Is it universally true that it is not necessary to talk about the intrinsic evils of abortion, abortifacient drugs, and gay marriage as often as possible? Absolutely not. I don’t know about Argentina, but I do know the world that I encounter every day that is on the precipice of losing countless generations to moral relativism. It is a world in which absolute truth does not exist. Indeed, it is a world that needs to hear salvation proclaimed and the faith catechized, but it is also a world that needs to be repeatedly told that life has value, that sex is marriage, and marriage is for opposite genders. They need to be repeatedly told these things because the enemy is repeatedly telling them that life does not have value, that sex is for recreation, and that marriage is not gender-specific. It is to the point now that whether we can first reach them through the Gospel or through natural law or through reason, we must help to save them by any moral means from destroying themselves.

It is as if our Pope is detached from the real world as if he doesn’t recognize the hour. His indifference towards moral relativism and what the world needs to hear right now is very troubling to me. He is like a man whose child is about to touch the hot stove and he doesn’t yell “STOP! HOT!” to the child. Rather, while the child is just inches away from touching the hot stove, he calmly tells the child what the stove is, then how the stove works, then after the child has burnt his hand on the stove he comforts the child and bandages their hand. Maybe it’s the Jesuit in him that gives him to presupposes that all people are rational beings that don’t need to repetitively hear the truth until it sticks.

While in his new job the Holy Father doesn’t yet seem to care to make the distinction between what the world needs to hear versus what the world needs to see from the Holy Father, the sustained success of his reformation will always hinge on his ability to transition from being a big vision leader to someone who can offer clarity of what he believes, build a system around it, and create disciples of his vision (trust and success are required for this last part).

Will the Catholic Church Survive the Reformation of Pope Francis? The answer is that the Catholic Church will survive the Reformation of Pope Francis; even if he continues this either-or approach, rather than an and both approach, but if his indifference towards moral relativism is embraced in the west, the west may not survive.

500 Years of Protestantism: The 38 Most Ridiculous Things Martin Luther Ever Wrote