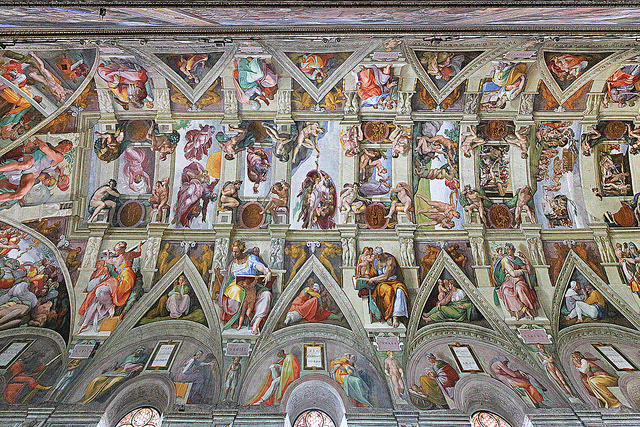 A notion has been creeping into the conversation of Catholic evangelization circles lately that it would behoove us to evangelize this generation through beauty; more precisely, that we should intentionally promote encounters with God through a formulaic movement from Beauty (How Wonderful I Sense it to Be), to The Good (I Desire to Participate/Share in It), to The Truth (Now I Understand What it Is).

A major proponent of this idea has been Father Robert Barron, a Catholic priest of the Arch Diocese of Chicago and the Rector/President of Mundelein Seminary. Barron is most famous for his creation of the Catholicism series. He has produced a video on the idea of evangelizing through beauty (here) that seems to mimic an article (here). Another good article on the subject is Catholic and American? Evangelizing through Beauty, by Bishop Olmsted of the Diocese of Phoenix.

Before I begin the critique of this idea and explain its three great dangers, I must clarify that I completely agree that the goodness of God can be found in beauty; that what is beautiful in the creation can lead one into an encounter with the Creator; that it is good for the senses to play a role in the encounter with God; and that the beautiful things that the senses can perceive, such as art and music, have always played a role in Catholic Christian evangelization. Pope John Paul II said it wonderfully when he wrote, “The world in which we live needs beauty in order not to fall into despair. Beauty, like truth, brings joy to the human heart, and is that precious fruit which resists the erosion of time, which unites generations and enables them to be one in admiration.”

I must also explain that my references to Father Barron in the article are not personal. I’m not attacking him or tearing him down. He just happens to be the point man on this formulaic notion of evangelizing through beauty as the first principle. In fact, Fr. Barron played a very important role in my early formation as a Catholic. I have watched every video that he produced through his Word on Fire Ministries prior to 2011, and I have read every book he had written prior to that year as well. I find him to be one of the most creative minds that our Church has had the opportunity to hear from in this generation.

The issue of danger here deals with the formulaic matter of using beauty as the first principle of Christian evangelization, as well as the danger of weakening/undermining/running-from the axiomatic Gospel of Truth, only so that we might easily preach the subjective idea of beauty. There is a grave danger found in giving up on the Truth, as well as the danger of losing another generation due to them receiving a version of Catholicism-lite if this method of evangelization is adopted. Altogether I find this idea of evangelizing through beauty as the first principle to be one of the most dangerous ideas ever uttered in modern Catholicism. I have taken time below to list what I believe are the Three Great Dangers of Evangelizing through Beauty.

First, there is a premature capitulation to relativism found in Father Barron’s promotion of this idea that inveighs against truth. He suggests that because modern culture is so relativistic, that they would instantly dismiss the truth if it is offered to them. Therefore, we must massage them into the truth by offering them a demonstration of beauty. Could you imagine if people like John the Baptizer, Saint Paul, or Saint Dominic had surrendered to comfortable ideas of their day? Inasmuch as relativism has always been in fashion, unfiltered truth has always been the light that broke through its darkness.

Rather than be cowards and surrender to relativism and be scared to lean on the primacy of truth, we ought to become martyrs of the truth. Being that truth has a divine support structure found in Jesus who is the Truth, the Holy Spirit who is the Spirit of the Truth, and in the Catholic Church that is the Pillar and Foundation of Truth and the Temple of the Holy Spirit, I am not quite certain why any Christian would allow any generation to scare them away from scaring it directly; even without having to massage them into through creations.

I have a question. Is God true because He is beautiful, or is He beautiful because He is true? Clearly, God is beautiful because he is true. Therefore, I am not certain why anyone would suggest that we focus on attempting to articulate how beautiful creation is when we haven’t even done all that we can do to clearly articulate to all how true our Creator is. Perhaps we should more diligent in redoubling our efforts to artfully articulate the truth, rather than wasting time on an endeavor that may or may not massage anyone into it. Such an effort does not have to be what Fr. Barron has reduced to being merely moralizing and intellectualizing, because the truth doesn’t need those help. The truth simply needs to be repeatedly shared and then God’s grace does the rest.

The most troubling thing about Fr. Barron’s idea is when he applauds the benefit of evangelizing through beauty because it is unthreatening. Are you serious? I’m really tired of soft Christians who are afraid of the fact that the Gospel of Christ is threatening! Yes, it is threatening to people who are living in lies and darkness! Yes! It is threatening because it is good and beautiful. Because it threatens it converts.

While Fr. Barron rightly notes through example that the aesthetic approach to evangelization can kidnap the heart and draw one into participation, he seems to dismiss the fact that truth can have that same effect. Even Bishop Olmsted in his article cites his own empirical evidence of beauty leading him to he faith, but how many millions of people can attest to truth leading them to the Church? Therefore, if both truth and beauty can lead a soul to good and to God, why not always lead in with the surest of the two? We would be much better off losing this fight because we shared the truth and they rejected it, than losing it because they rejected it because we preferred not to share it.

Third, the reliance on the senses will lead to a more Protestant-like Catholicism. If you want to know how successful a Church can become by emphasizing an appeal to the senses, then just look at modern Protestantism. It has become the religion of emotions found in praise music, dancing, and poetry. It is truly romantic and idealistic that we could facilitate a soul’s move from beauty, to good, to truth, but the reality of the situation is that many people will get stuck at beauty, just as they are in modern Protestantism. Many will not move beyond feeling good in the senses, and they will remain at a cursory level in a shallow faith life.

In conclusion, what remains for me to say is that evangelizing through beauty as the first principle is, indeed, a beautiful idea, but it just isn’t tenable, and it is too risky in this age to attempt, even if it was trustworthy, which it is not. We must always begin with the truth, because it is God’s most powerful weapon. To begin with anything less than the truth is to begin with something less than what the world deserves to hear.

Jesus then said to those Jews who believed in him, “If you remain in my word, you will truly be my disciples, and you will know the truth, and the truth will set you free” (John 8:31-32).

A Church in His Image: The Reformation of Pope Francis - Part II