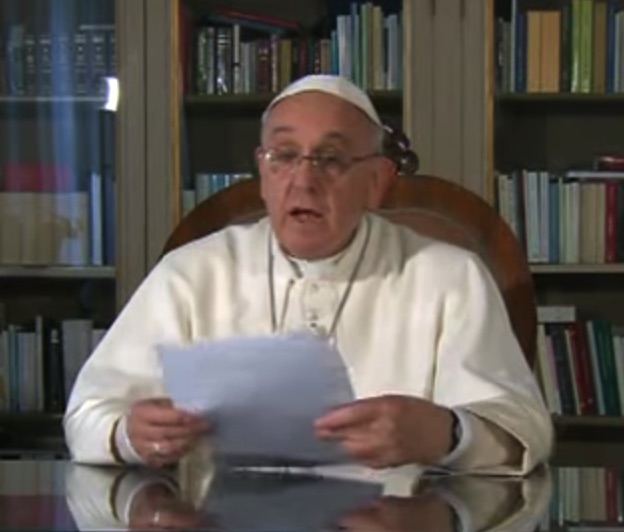 SUBJECT: THE SERPENT WHISPERS YOUR WORDS TO EVE

I’d like to thank you for cooperating with God in responding to your call to the Petrine Ministry. I converted to true faith in 2006, and Pope-Emeritus Benedict XVI played a huge role in my conversion. I found in him a bountiful oasis of stability, truth, and connection to the Apostles that I needed at that time, because all around me all there was to hear about the Catholic Church was about priests who molested children. I knew precisely where the Holy Spirit was trying to lead me, but if not for Pope-Emeritus Benedict’s encyclicals, books, and bold confrontations against relativism, I wonder if I would have ever felt safe converting.

So you are my first new Pope, and I have enjoyed many of the examples that you have set during this first year of your pontificate. You’re a very different Peter than Pope-Emeritus Benedict XVI in some ways, and there are things to appreciate and love about that. I pray for you almost daily, and frequently I ask the Blessed Mother to pray for your peace, protection, and fortitude.

Holy Father, the reason for this letter is one thing. Back on Sunday, July 28, 2013, you entertained a number of questions on your return flight back from your Apostolic Journey to Rio De Janeiro for the XXVIII World Youth Day. During this occasion, it happened that a reporter (Ilze Scamparini) asked you do you intend to confront the whole question of the gay lobby. Included in your remarks was the volleyed question, “If someone is gay and is searching for the Lord and has good will, then who am I to judge him?”

In the context of your whole response to the reporter, and in light of your deeply emphatic and compassionate approach to your pastoral ministry, I understand what you meant, but the world did not. Over the past year, those five words of your interview that day (i.e. ‘who am I to judge’) have become the new mantra for those who reject the truth, and it is only getting worse.

Those five words of yours have been twisted by Satan in every corner of the globe to mean that Pope Francis has allowed for apathy in response to sin. You meant what you said in love, but your words are now being used against the love found in the spiritual works of mercy of admonishing the sinner, instructing the ignorant, and counseling the doubtful. As you know better than I, all of these works require the Christian to exercise judgment of actions (including words), but not of the heart. Yet, your five words are now being used against us, so that we will not perform those spiritual works of mercy.

Even legislators and judges, throughout the world, are repeating your five words as they legislate so-called homosexual-marriage. You may not have meant it, but by saying those words, and by not speaking clearly about what you meant later, or even what type of judgment that Christ Jesus and the Apostles and the Prophets permitted and encouraged, you gave Satan a great weapon. Long has the evil one been attempting to redefine love as apathy, and now he has your words to help him. Without intent, these five words of yours have caused confusion and chaos, and there is no end in sight.

Therefore, help, we pray, Pope Francis that you will take a moment to speak to the world, clearly and definitively about who you are to judge. You are the Pope, if you can’t rightly judge actions and words, then who can? Help, we pray, that you speak to the world, clearly and definitely about the distinction between love and apathy.

Holy Father, please stop allowing Satan to take these innocent words of yours and use them as his footstool. Speak clearly to put an end to this mess. At least try!