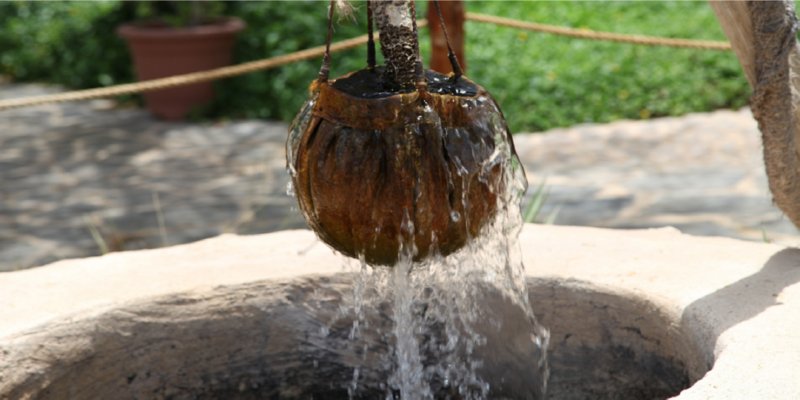 If you are familiar with John’s style of writing, you’ll recall that he doesn’t waste one single word. For him, every word, comma, and period is the most intentional thing that he could possibly do, and every new story he tells is set up perfectly with the introductory paragraph. In the instant case, John 4:5-42 begins:

According to Biblical Archaeology, ‘Jacob’s well’ was situated at a major fork in the road, with one branch turning west to Samaria and western Galilee; the other Northeast towards Beth-shan and the Lake of Gennesaret. Mt. Gerizim was to the Southwest of the well. The village in this story, Sychar, was probably modern-day Askar, which was a half-mile Northeast from the well.

The back-story to this narrative is that the Samaritans had messianic expectations, which were somewhat different than the Jews who were in the Southern Kingdom of Israel. The messiah that they were expecting was to come and uncover the lost Temple vessels and to vindicate their tradition of worship on Mt. Gerizim, which they believed to be the location of Jacob’s heavenly vision in Genesis 28:16-18.

Although the Samaritans were a racially mixed society with both Jewish and pagan ancestry, they still worshiped YHWH, but their expression of the faith was much more mainstream than Judaism. They only accepted the Torah and didn’t believe that visiting the Temple at Mount Zion for required feasts and sacrifices was a requirement of the faith. As was stated, their temple was on Mount Gerizim. Nor, did they believe in the prohibition against speaking aloud the divine name in their oaths. For their mixed blood and the rejection of some of the law, the Samaritans were looked down upon, despised, and marginalized by ordinary Jews. For their part, Samaritans harbored antipathy toward the Jews (Cf. Luke 9:52-53). Therefore, it is interesting to discover Jesus at the outset of this narrative resting in a region that ordinary Jews would go out of their way to avoid, out of fear of being contaminated by these unclean people.

After Jesus asks the woman at Jacob’s well for a drink of water, she doesn’t fail in her duty to remind the man, who apparently looks like a Jew (she profiles him as a Southerner) to her, that she is one of those ‘unclean’ Samaritans. “How can you, a Jew, ask me, a Samaritan woman, for a drink?” For Jews use nothing in common with Samaritans.” And it’s at this point that the conversation turns. Jesus hasn’t asked this woman for H2O; rather, He’s told her that she can’t give Him what she doesn’t actually have. “If you knew the gift of God and who is saying to you, ‘Give me a drink, ‘ you would have asked him and he would have given you living water.”

With this question, some Biblical commentators take the woman’s question to suggest that she is still talking about H2O; that she still doesn’t get it. Yet, the one thing we know about Gospel narratives is women are very smart. They usually know what’s going on quicker than men do, and that tradition doesn’t depart here. What the woman at the well is doing with this question is testing Jesus. Again, these are people who had messianic expectations. Jesus understands this, and He knows what this woman is up to right now.

What John is doing here is building up an important typology of Jacob, which he began in John 1:51. When the woman tells Jesus that He doesn’t even have any means to procure the water from the well, we have to tie that statement together with her question that followed, ‘Are you greater than Jacob’, because according to Jewish Targumic tradition, Jacob was associated with a miracle in which the water would bubble to the top of the well and continuously overflow. Therefore, when Jesus tells her, “The water I shall give will become in him a spring of water welling up to eternal life,” He not only proves to her that He is actually is greater than Jacob, but that He altogether supplants the reality that had been described in the Old Testament; that is He is the new manna and the new water of the desert (Cf. John 6:49-51; 11:9-10). Whoever eats this bread and drinks this water will have eternal life.

After offering her a description of how what He has to offer her is so much greater than what she can provide for herself, she asks Jesus, “Sir, give me this water, so that I may not be thirsty or have to keep coming here to draw water.” To which, Jesus demonstrates to her that He knows her and all about her condition. At this point, she has all the evidence she needs to believe that this Jew at the well is a prophet, but the jury is still out about whether He is the long-awaited messiah. “Sir, I can see that you are a prophet.”

‘It is clear this Southerner is a prophet but is He the messiah?’ she must have mused to herself. ‘If our messiah is a Jew, then what does that mean about our tradition of worship?’ She asks, “Our ancestors worshiped on this mountain; but you people say that the place to worship is in Jerusalem.” What Jesus does with this question is not affirm the Samaritan tradition, but, rather, essentially does the same thing that He does with Jewish tradition. That is, He demonstrated how what He has to offer is the new wine for the new wineskin. It is both the tearing down and the fulfillment.

As her passive-aggressive questioning continues, there is but one final test she has for Jesus, “I know that the Messiah is coming, the one called the Christ; when he comes, he will tell us everything.” To which, Jesus definitely responds, “I am he, the one speaking with you.”

After hearing this the woman leaves Jacob’s well and as well, as her water jar, behind to go bear witness to her neighbors that she has found the messiah. John continues the tradition of the synoptic Gospels in portraying women in the role of being not only the first evangelists of the faith but evangelists with a harvest.

The call of this Gospel Reading is a simple one. Christ Jesus is the fulfillment of all that is good and true. In Him, we have found more than we could possibly desire for ourselves, and in us we, He has found the people He wants to give all that He to give.