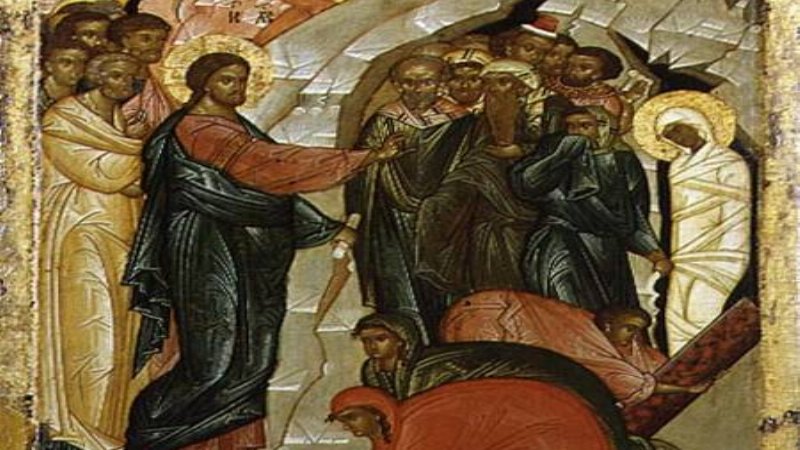 The story of Jesus raising Lazarus from the dead is a very popular story in the Christian tradition, and because it is contained within the body of the Gospel of John, it is also necessarily filled with rich Christological meaning.

In building up this narrative, John was particularly careful to tie the life of Jesus together with Genesis’ creation narrative, Jewish oral tradition, and the fulfilled theology of the prophets. He has a couple more truisms to go yet (e.g. the true vine; the true truth), but with the story of Lazarus, this is somewhat of a climax for John, because for him it was this miracle that finally pressed the religious establishment to make a decision. They have had enough of Yeshua and all of His miracles. For expediencies sake, it is time for them to kill this one man so that the Romans do not come and take the whole country (Cf. John 11:45-54).

John continues to portray Jesus as being just no ordinary prophet. Even the prophets performed miracles, but the type of miracles that Jesus performs are unheard of. In the instant case, we could recall the prophet Elijah who brought back to life the son of the widow of Zarephath by stretching his body across the boy three times as he called out to the Lord, “O Lord, my God, let the life breath return to the body of this child” (1 Kings 17). But how much greater is Jesus who comes to Lazarus? The widow’s son could have just been in a coma, but Lazarus had been dead long enough of time that the rabbinical authorities would have said that his soul had left the vicinity of his body, and decay and rigor would have begun to set in.

Martha and Mary know that Jesus had waited too long; “Lord, if you had been here, my brother would not have died.” Even the Jews near the tomb knew that Jesus had arrived days too late; “Could not the one who opened the eyes of the blind man have done something so that this man would not have died?” But greater than Elijah is the Lord; For, Elijah had to stretch himself over the body of the child three times and cry out to God, but Jesus simply “cried out in a loud voice, “Lazarus, come out!”, and the dead man came out.

In this way, Jesus is the fulfillment of how Ezekiel prophesied that we would know when the Lord has come. He said:

I will put my spirit in you that you may live, and I will settle you upon your land; thus you shall know that I am the LORD. I have promised, and I will do it, says the LORD.

Similar to Jesus’ sign of the healing of the blind man, the purpose of Lazarus’ death and resurrection is was so that the works of God might be made visible through the Son so that the Father will be glorified. Though this opportunity makes Jesus glad, this reality also invites a dilemma; that the more a person reveals about themselves, the more that they become loved and hated by those around them. Indeed, the disciples seem to sense that Jesus is doing too much lately; that He is arousing the religious establishment beyond repair. “Rabbi, the Jews were just trying to stone you, and you want to go back there?” After Jesus informs them that they must go back to Bethany to awake their ‘friend’ Lazarus, Thomas, called Didymus, fearing a stoning at the hands of the Jews, quips “Let us also go to die with him.”

Remember, John doesn’t waste words in his narratives, and he likes to repeat things just so that we don’t miss them. He’ll hint with repetition in this narrative with the statement, “Lord, if you had been here, my brother would not have died,” that he attributes to both Martha and Mary, and he’ll do it again in vv. 3, 5, and 36. In v. 3 he writes, “So the sisters sent word to him, saying, “Master, the one you love is ill,” that combines with v. 5, “Now Jesus loved Martha and her sister and Lazarus,” so that he might create the impetus behind why Jesus would put his life on the line to go help them. Then in v. 36 Jesus’ love for Lazarus is repeated when he comments on how the Jews saw Jesus weeping and angry/perturbed (Gk. verb embrimasthai), and said, “See how he loved him.”

The Gospel of John doesn’t leave any open questions; rather, everything is put together nicely neat, and tucked. He’ll tie together the fuller meaning of Lazarus’ resurrection and the true purpose of resurrection later in his discourse on the vine and branches in 15:13 where Jesus says, “No one has greater love than this, to lay down one’s life for one’s friends.” This is why it was important for John to tell us that Lazarus was a friend. Friends are those you would die for.

It is also important for John to talk about love in this narrative because love is why Jesus will put His own life and the life of His disciples in danger to save Lazarus. Love will also compel Him to give up His own life on the Cross. Then after Jesus is resurrected one of the people that He visits is Simon Peter, and the purpose of that visit was to talk about love; “Simon, son of John, do you love me?” (John 21:16). John breaches the topic of love three times in the dialogue with Simon Peter, just as he does in the Lazarus narrative. He also visits another person mentioned in this story; Thomas, who comes to love and believe in the resurrected Jesus (John 20:24-29).

Altogether, what John has done here is show us God the Father through His Son. Lazarus is a type of Christ in the tomb who the Father resurrects. Why? Because He loves the world (John 3:16). Lazarus is an image of the eternal life that faith compels us to have In Christ. We draw nearer to Jesus, and follow Him, and go where He goes because He is our friend. And while this is a friendship that will inevitably lead to persecution and, perhaps, death, we remain In Christ because we love Him and He loves us.

In fact, for those who believe that Christ Jesus has the words of eternal life and who desire a happy life after death, there is nowhere else to go (Cf. (John 6:68).