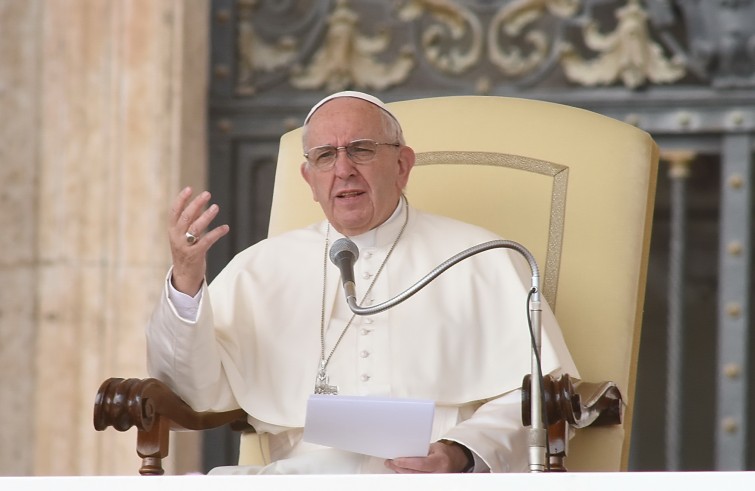 “So much is written about the gay lobby. I still haven’t found anyone with an identity card in the Vatican with “gay” on it. They say there are some there. I believe that when you are dealing with such a person, you must distinguish between the fact of a person being gay and the fact of someone forming a lobby, because not all lobbies are good. This one is not good. If someone is gay and is searching for the Lord and has good will, then who am I to judge him? The Catechism of the Catholic Church explains this in a beautiful way, saying … wait a moment, how does it say it … it says: “no one should marginalize these people for this, they must be integrated into society”. The problem is not having this tendency, no, we must be brothers and sisters to one another, and there is this one and there is that one. The problem is in making a lobby of this tendency: a lobby of misers, a lobby of politicians, a lobby of masons,s so many lobbies. For me, this is the greater problem.”

Apostolic Journey to Rio De Janero on the Occasion of the XXVIII World Youth Day Press Conference of Pope Francis During the Flight
— Sunday, 28 July 2013

Then it happened immediately following the publication of that infamous in-flight Papal interview that five words of it – “Who am I to judge” – became like the shot heard across the world. Overnight these five words of Pope Francis became the mantra for everyone who didn’t agree with the Catholic Church on the sanctity of marriage and the dignity of human life. From the slums to the highest levels of government, those five words became a license and an excuse to be apathetic towards sin and immortality. Those five words became liberals’ favorite weapon to use against people who actually care enough to care about the well-being of souls.

I got so fed up with hearing politician after politician, from all around the world using those five words (out of context) to justify why they voted in favor of legislating homosexual marriage, that I penned an open letter to Pope Francis on March 25, 2014, entitled, “Help, We Pray, Speak Clearly.” I mailed it to him, hoping that he might read it and be encouraged to speak clearly about the distinction between judging a person’s actions (those things that we can know) versus judging their intentions, motives and heart (those things that only God is privy to).

Well, here we are nearly a year after Pope Francis in-flight interview and not only are those who hate the Church still using his “Who am I to judge” out of context to justify every socially acceptable evil, but rather than clarify what the Bible actually says about judging, Pope Francis, in his morning homily on Monday, June 23, 2014, has decided to double-down on this non-judgmental theology; still failing to talk about the dichotomy of judging. The backdrop to his homily was the Gospel reading from that day, Matthew 7:1-5.

Pope Francis took from that Gospel reading all of the typical things that people take from it. He said “The person who judges is wrong, is mistaken and is defeated because he assumes God’s place: He who is the one and only judge.” He talked about being a hypocrite by judging others while leaving the beam in your own eye. He ending being quite judgmental himself by calling hypocrites “obsessed with the person he wants to judge . . .” If we want to follow the way of Jesus, the Pope said, “more than accusers, we have to be defenders of others before the Father. I see a bad thing in someone – do I go defend him? No! But keep quiet! Go pray and defend him before the Father as Jesus does. Pray for him, but do not judge! Because if you do, when you do something bad, you will be judged. Let us remember this well; it will do us good in everyday life when we get the urge to judge others, to speak ill of others, which is a form of judging.”

There are three big problems with what Pope Francis said in his homily. The first is that his populist interpretation of Matthew 7:1-5 is a literal misinterpretation of what Jesus was actually saying. In my article ‘What the Bible Actually Says about Judging Others‘, I go into some measure of detail about what Matthew 7:1-5 is actually saying. Check it out.

The second problem is that what he said about just be quiet and go pray, rather than judge is not what the Bible says at all about judging. If fact, according to Ezekiel 33:1-9 we might be sinning if we do what the Pope suggests. I being hyperbolic here. Certainly, Pope Francis isn’t encouraging sin, inasmuch as he is foisting upon us his own spirituality, as I mentioned in my article ‘Will we survive the Reformation of Pope Francis – Part I, that he has a need to do.

Thirdly, altogether the Pope’s non-judgmental theology tends towards indifferentism and apathy towards sin, in that he would have us just ignore what everyone is doing and mind our own business and, essentially, not love.

On the contrary, love is not at all about being apathetic and indifferent towards immoral actions that we see our friends, neighbors, and strangers commit. Rather, true love does care enough to care about people living their life in a way that will result in their eternal damnation. True love leads us to sacrifice, even of our own lives, so that those who we love don’t remain shackled to the slavery of sin.

If the Pope wants to talk about following Jesus, it’s not JUST by the way of being quiet and going off to pray. No! Our way is not prayer-alone. Jesus died on the cross! Jesus cared! Jesus jumped into humanity to put his feet on the ground to give us a better way. Jesus did more than just pray! Jesus acted! Jesus judged the fruit on the tree and told us to do so too!

The Christians I have in my life are there because they are the opposite of Pope Francis in this one regard. The people I have in my life judge my actions and tell me when I could have made a better decision. They don’t condemn me or judge my intentions or heart, but they do tell me about the quality of my actions. The priest in the confessional doesn’t judge me, but he tells me about the quality of my actions, and he is able to do that because he judges them according to the standard of holy living. I’m very thankful that my friends do not affirm me in my sins or remain quiet.

Again, when it comes to what the Bible says about judging, we always have to make the distinction between unjust condemnation of actions based upon an assumption of motives and intention versus a just evaluation of actions. Only God can judge the heart, but man was given two ears and two eyes to judge the quality of actions, and one mouth to counsel, encourage, and edify our brother and sister concerning their actions.

How Do We Cooperate with God? (Praxis of the Faith)

Italian and French Commentary on Francis, the Pope of Non-Judgment