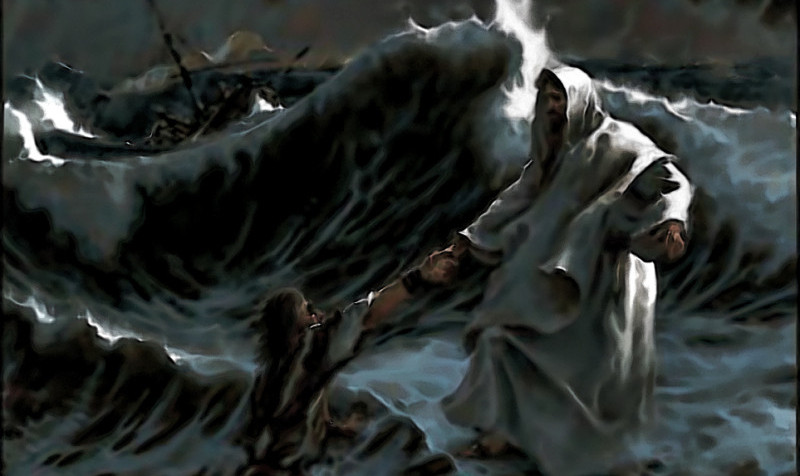 Luke is the only Gospel not concerned with the ‘walking on water’ narrative. In Luke 8:22-25 there is a story about a boat having been caught in a storm out of which Jesus admonishes the disciples for not having faith, but no one is walking on water. Perhaps the reason why Luke avoids that account is because he has a very different scope of God’s revelation of His Son and the mission of Christ Jesus in salvation history than the others do. In other words, Luke is much more concerned with presenting Jesus through the lenses of prayer and healing than he is with presenting arguments for ecclesiology and the fulfillment of prophecy, which this narrative greatly engaged in.

In contrast to Luke, Mark 6:45-52 and John 6:15-21 are very close to Matthew. For all three accounts, this story follows the Miracle of the Multiplicand of Loaves and Fishes in sequence, and the only major point of divergence for Mark and John is a lack of a motive to make any special mention of Peter.

For us to best understand this narrative, we have to spend a moment to contextualize and couch it into the Canaanite myth and Jewish understanding about a God who overcomes waves of death. Jesus walking on water and calming it not only demonstrates His authority, but it only demonstrates how He is greater than the Prophet Moses. Moses wrought God’s delivery of the Israelites out of Egypt by parting and closing the waters, but he needed a staff and some assistance from others to do so. In contrast, Jesus walks on the water, not through it; His mere presence in the boat causes the waters to calm; and, according to Matthew, He can command others to walk on water as well. Here are some of the Old Testament verses to consider:

Psalms 77:17-20:
“The waters saw you, God; the waters saw you and lashed about, even the deeps of the sea trembled. The clouds poured down their rains; the thunderheads rumbled; your arrows flashed back and forth. The thunder of your chariot wheels resounded; your lightning lit up the world; the earth trembled and quaked. Through the sea was your way; your path, through the mighty waters, though your footsteps were unseen.”

Job 9:8:
“He alone stretches out the heavens and treads upon the back of the sea.”

Sirach 24:5-6:
“The vault of heaven I compassed alone, and walked through the deep abyss. Over waves of the sea, over all the land, over every people and nation I held sway.”

Picking the story back up now; It was in the dark of the evening when Jesus was all alone up a mountain praying, while His disciples were just a few miles offshore rowing towards Capernaum. Next, the sea starts getting stirred up and their boat begins getting “tossed about by the waves, for the wind was against it.” The text then tells us that it wasn’t until the fourth watch of the night that Jesus “came toward them, walking on the sea.” This time-stamp is important to note here because all three Gospels tell us that it was in the evening (i.e. about 6 PM) when the boat began encountering a strong wind, but it wasn’t until the fourth watch, which translates into 3 AM (approx. nine hours later), that Jesus decided to bring peace to their arduous situation.

Matthew then informs us that when the disciples spied Jesus walking towards them on the sea “they were terrified. “It is a ghost,” they said, and they cried out in fear.” Jesus’ response to them was, “Take courage, it is I; do not be afraid.” Note that the literal translation of the phrase “it is I” is “I am”. The reason why it is so important to note what Jesus literally said here is because it ties us directly back into the Israelites exodus from Egypt by the hand of the God who described Himself to Moses as, “I AM” (Cf. Exo. 3:14). Through Moses, (Heb. משה – mashah, meaning “drew out”) God will use water to draw His people out, but through His only beloved and begotten Son Jesus (Heb. שׁוּעַ – Yeshua, meaning “God saves”) He will use water to save them.

For the next four verses (vv. 28-31) Matthew will depart from the other traditions so that he might give special prominence to Simon Peter, as he will do again in 16:17-19 and 17:24-27. A great deal has been written about these four verses. Typically, what is said here has something to do with faith versus doubt in Christ Jesus. While Peter was undisturbed by the wind his faith kept him afloat and moving towards the Lord, but when the wind came he began to doubt and need to cry out to Jesus to save him. For Catholics, the boat is an image of the Church that gets tossed about by the winds of culture. When some press that analogy further they infer it means that, inevitably, the gates of Hell will press against the Catholic Church so strongly that even the successor of Peter (the Pope) will doubt momentarily before he cries out for our Savior, and that will be around the time of final epoch in Salvation history when Christ comes to usher in His fulfilled Kingdom of peace. It will be then that all knees will bend and say “Truly, you are the Son of God.” I think all of those types of reflections are very worthwhile and good for application for our personal life and the life of the Church.

Yet, one thing we should remember in our reflections is that the men in that boat were very skilled fishermen. The winds and the waves were bad, but they were not in as dire straits as in Luke 8:22-25 where the boat was taking in water and the disciples thought they were in danger of dying. On the contrary, a boat out on the lake at night and encountering strong winds was probably nothing new for them. We can make a safe assumption that they had been in such a predicament before. Even Luke 5:5 tells us that Peter had a thing for fishing at night. What was new was Peter’s audacious idea to leave the reasonably safe confines of the boat to go walk on water. If Jesus had given him the name feather instead of rock, perhaps it might not have been such an audacious request, but that’s not what we’re dealing with. His name is rock and he wants to walk on water . . .

An interesting thing is that all three of these narratives end in a completely different way. Matthew ends with Jesus getting into the boat, the wind dies down, and the disciples paying Him homage, saying “Truly, you are the Son of God.” In Mark, Jesus also gets into the boat and the wind dies down, but there is no paying Him homage. Rather, the disciples “were [completely] astounded,” and Mark explains them being astounded was because their hearts had been hardened because they hadn’t understood the miracle of the multiplication of loaves and fishes. There is an important connection between these two miracles that Mark wants to make here. In John’s account, Jesus doesn’t get in the boat at all. The text says, “they wanted to take him into the boat, but the boat immediately arrived at the shore to which they were heading.”

In conclusion, I would say the most important thing to take from the ‘Walking on Water’ narrative are the implications that it has with the Old Testament references of the authority God has over water. This is a direct appeal to Jews, and another reason why Luke, who is appealing to non-Jews, thought the tradition of Jesus calming the storm was important, but walking on water was not.
.

Does Your Belief On Ordination Line Up With The Early Church's Belief?