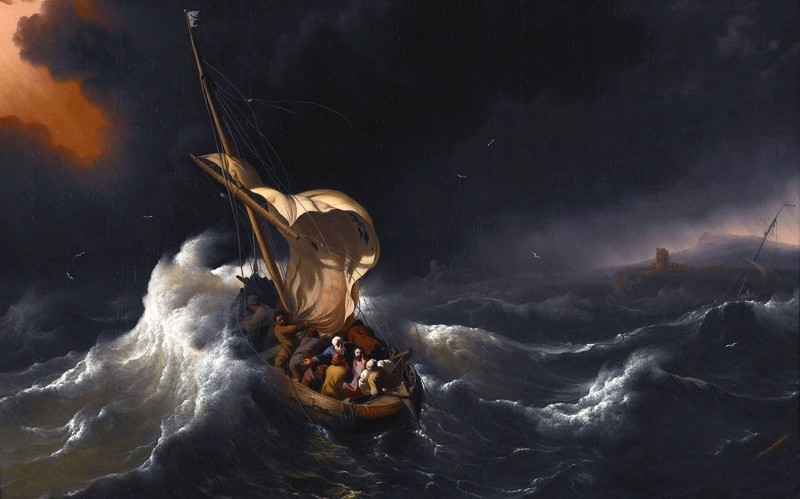 The ‘Miracle of the Calming of the Storm at Sea’ belongs to all three Synoptic Gospels (Matthew 8:23-27, Mark, and Luke 8:22-25), and all three are not only nearly identical in content but also share the same goal of portraying Jesus as having the authority of God to calm storms that a Jewish audience would have connected with Psalm 107:23-32:

“Some went off to sea in ships, plied their trade on the deep waters. They saw the works of the LORD, the wonders of God in the deep.

He commanded and roused a storm wind; it tossed the waves on high.

They rose up to the heavens, sank to the depths; their hearts trembled at the danger. They reeled, staggered like drunkards; their skill was of no avail. In their distress they cried to the LORD, who brought them out of their peril; He hushed the storm to silence, the waves of the sea were stilled. They rejoiced that the sea grew calm, that God brought them to the harbor they longed for.

Let them thank the LORD for his mercy, such wondrous deeds for the children of Adam. Let them extol him in the assembly of the people, and praise him in the council of the elders.”

In the ancient world, the sea was a powerful force, especially for people who depended upon the sea for sustenance, survival, defense, commerce, trade, and travel. The sea was fickle in what is offered men. It either blessed him with safety and security or it could instantly turn against him and could cost him his very life. There was also the Near Eastern idea that the sea symbolized the powers of chaos and evil that struggled against God.

Mark doesn’t care to inform us as to why Jesus decided to cross to the eastern shore of the Sea of Galilee, other by saying “Leaving the crowd . . ., but by leading with “On that day”, he seems to be simply attaching this event to the same day that Jesus had spoken the parables on the Sower, Lamp, and Mustard Seed (thus, the crowd). In Matthew, Jesus gives orders for His disciples to ready the boat to cross the sea because He wanted to escape the crowd that was gathering around Him, which would seem to agree with Mark’s oral tradition. Luke begins his ‘Calming of a Storm at Sea’ narrative with the isolated, “One day he got into a boat . . .”

“Leaving the crowd, they took Jesus with them in the boat just as he was. And other boats were with him.” This a verse that is unique to Mark, but is very important for the Christology and Ecclesiology he’s building. In v. 1, we also saw Jesus get into a boat on the sea and sit down, but in that instance, He situated Himself there to teach, and Mark will move forward with that imagery with the boat now being a place where Jesus teaches with authority in the company of His Apostles. There are other boats also at sea, but only one of the boats out here has Jesus in it. The boat is becoming a symbol for the One Apostolic Church where Christ can be found.

After they set out to sea a violent squall had come upon the boat and broke over it, and it began to fill up with water. While squalls were a common occurrence on the Sea of Galilee, they were nonetheless dangerous. Yet, being that at least four of the people on this boat were experienced fishermen, and should have had all the knowledge needed to know how to best negotiate a boat under these treacherous conditions. There were also other boats out there that were out there as well being tossed about, but none of them had the same manifest of passengers as this one did.

Mark is again alone in giving the specific location of Jesus on the boat; he writes, “Jesus was in the stern, asleep on a cushion.” This tidbit of information is very interesting because the stern is in the back or aft-most part of the boat where you put the person who was responsible for steering the boat, and that is where we find Jesus sleeping on a cushion while the boat was obviously in desperate need for someone to help steer it through that violent gust of wind and rain that had come upon it.

Again, at least four of these men were skilled in negotiating a squall, which as a common occurrence on Galilee, so when they awoke Jesus to ask Him, “Teacher, do you not care that we are perishing?” – What they are simply asking Jesus to do is to wake up and do His part to navigate the boat. Don’t you care to do your job? We’ll die if you don’t. Get in the game dude! Jesus was the guy at the stern. His job was to steady the boat through the squall by guiding it through the storm, but He wasn’t. He was asleep.

Jesus had a very funny response to His disciples trying to press a guy who was trained in carpentry to steer a boat through a squall. “He woke up, rebuked the wind, and said to the sea, “Quiet! Be still!” The wind ceased and there was a great calm. You can probably see this scene play out in your mind’s eye right? It’s sorta like what happens when your spouse or your parent comes in the room in the morning to wake you up, and you barely wake up to mutter to them, ‘Just give me five more minutes,’ as you roll back over.

I really want to believe that Jesus asked them this deep and probing question, “Why are you terrified? Do you not yet have faith?” – and then rolled back onto His cushion and went back to sleep. That is an awesome image of the God who rested on the seventh day of creation.

Jesus never had His question answered by the disciples – perhaps it was just rhetorical – something for them to think about for now, and they themselves asked a question they didn’t yet have an answer to. This text reads, “They were filled with great awe and said to one another, “Who then is this whom even wind and seas obey?” This is a great question to end the story because it points back to the fact that the disciples were not expecting anything miraculous from Jesus. They just wanted their Rabbi to wake up and do what the guy in the stern is supposed to do – steer the boat, but what He gave them was so much more. They were ready to press through the squall and keep taking on rain, but He was ready to deliver them from it. God is great!

How the Black Protestant Church Helped Destroy the Black Community