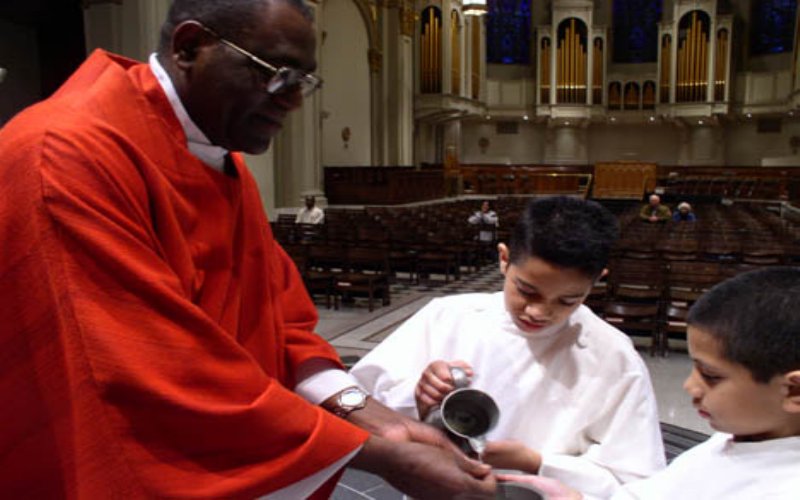 “When the Pharisees with some scribes who had come from Jerusalem gathered around Jesus, they observed that some of his disciples ate their meals with unclean, that is, unwashed, hands. — For the Pharisees and, in fact, all Jews, do not eat without carefully washing their hands, keeping the tradition of the elders. And on coming from the marketplace they do not eat without purifying themselves. And there are many other things that they have traditionally observed, the purification of cups and jugs and kettles and beds. So the Pharisees and scribes questioned him, “Why do your disciples not follow the tradition of the elders but instead eat a meal with unclean hands?” He responded, “Well did Isaiah prophesy about you hypocrites, as it is written:

This people honors me with their lips, but their hearts are far from me; in vain do they worship me, teaching as doctrines human precepts.

You disregard God’s commandment but cling to human tradition.”

He summoned the crowd again and said to them, “Hear me, all of you, and understand. Nothing that enters one from outside can defile that person; but the things that come out from within are what defile. From within people, from their hearts, come evil thoughts, unchastity, theft, murder, adultery, greed, malice, deceit, licentiousness, envy, blasphemy, arrogance, folly. All these evils come from within and they defile.” (Mark 7:1-8, 14-15, 21-23)

Unless this dialogue that Jesus had with the Pharisees is contextualized, its entire meaning and purpose is like a grain of flour in a windstorm. This narrative above from Mark is also found in Matthew (15:1-20), but unlike Matthew, Mark uses some words to accommodate his non-Jewish audience who were unfamiliar with the practice of ritualistic purification. Such is the case in v. 2 where Mark has to clarify what he means by “unclean hands”, by writing, “unwashed”, and then in vv. 3-4 – “For the Pharisees and all the Jews . . .” – he adds a parenthetical explanation that is specifically directed to a non-Jewish audience.

As a side-note, this effort by Mark gives us a piece of significant evidence about this Gospel’s audience and intended purpose. Nearly two millennia later, many of us are just like those in Mark’s audience, who had very little knowledge of ritualistic purification. Thankfully, what Mark’s parenthetical explanation does, in contrast to Matthew’s account, is to help us realize that the issue that the Pharisees had with Jesus’ disciples was not about not their hygiene. Rather, the issue that the Pharisees were pressing here was their theology that all Israelites were a ‘priestly people’, and being a ‘priestly people’ all Israelites needed to obey the traditional (man-made) laws of the elders (the Oral Torah/Law) concerning ritual purity that had applied only to the Levitical priesthood in Old Covenant; some of which Mark lists within the parenthesis (“cups, and jugs . . .”)

The practice itself of washing hands for ritualistic purification is what Jews then and today call the n’tilat-yadayim, which is done to remove impurities that you may have acquired by touching ceremonially impure things, such as products in the marketplace. To perform the n’tilat-yadayim, you would simply rinse your hands all the way up to the wrists with water. Why? Because your home is your temple and your dining table is your altar and the food on it is your sacrifice and you are the priest (cohen). Therefore, being that the Tanakh requires the cohanim to be ceremonially pure before offering sacrifices on the Temple altar, the Oral Torah requires the same before eating a meal. Jesus’ disciples rejected all of this.

Jesus responds to the Pharisees’ challenge by telling them that human tradition, should never trump God’s commands. It is essential to point out here that Jesus is not in any way opposed tradition itself (see: John 7:37, 1 Cor. 11:2, and 2 Thess. 2:15), but rather to, as He says, your tradition (vv. 9, 13). The example He uses to show the Pharisees how they have become hypocrites (lit. fake/phony people) by positioning the Oral Torah above the Written Torah is by talking about how they have allowed people to get away from supporting/helping their parents by telling them that “Any support you might have had from me is qorban” (meaning, dedicated to God).” The qorban of the Oral Torah can never trump the command to ‘Honor your father and mother’ of the Written Torah.

Indeed, throughout the Gospels we clearly see Jesus affirming the proper application of the Oral Torah; that is, where it does not contradict or attempt to supplant the Written Torah. This is especially clear in many of Jesus’ dialogues with the Pharisees in response to His works done on the Sabbath. Moreover, Jesus is demonstrating that He is the authentic and perfect interpreter of God’s law.

From within people, from their hearts, come evil thoughts, unchastity, theft, murder, adultery, greed, malice, deceit, licentiousness, envy, blasphemy, arrogance, folly. All these evils come from within and they defile.”I agree here with some Jewish commentators, such as David H. Stern (‘Jewish New Testament Commentary’) that there is the slightest hint anywhere that “food” in this verse can be anything other than what the Written Torah allows Jews to eat; that is kosher foods. I also agree with scholars who point out that the parenthetical statement is Mark’s (or Peter’s who tradition says the author Mark is quoting in his Gospel account) and not Jesus’. Perhaps this parenthetical is Peter’s interpretation of Jesus’ teaching post his vision of God saying, “What God has made clean, you are not to call profane” (Acts 10).

Alternatively, if we just look at Jesus’ literal words and exclude the added parenthetical, I think it is clear to see that Jesus is clearly teaching that with food the digestive system has a natural biological function to release what is receives. But if you think what comes out of a person’s anus is impure and defiles, try examining what comes out of that part of their self that makes them who they are; their spiritual heart. Indeed, what Jesus is doing here is continuing His dialogue on how we out to prioritize our spiritual (our true self – inside of the vase) well-being and obedience to God, over ritual (our pretentious self – outside of the vase) well-being and obedience. This is the way of becoming less hypocritical (phony), and learn how to honor God with our heart near to Him, rather than with vain words that spring from human innovation.