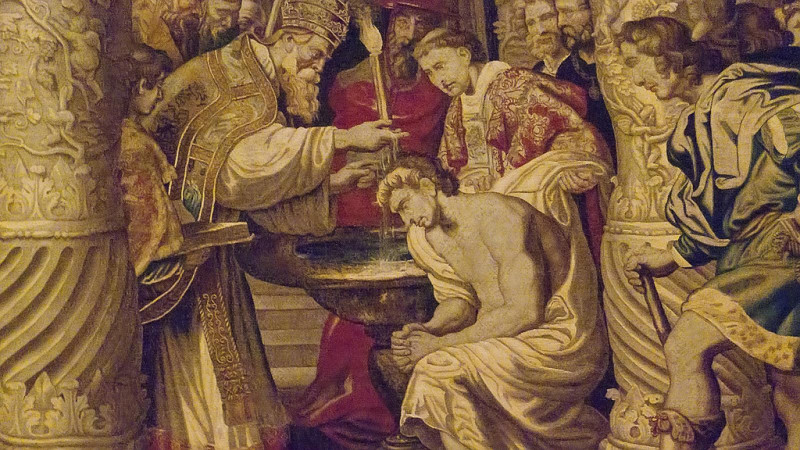 n 312 A.D., outnumbered but determined, Constantine moved against Maxentius, marching his army down across the Alps at lightning speed. Maxentius drew up his forces along the Tiber River, some nine miles north of Rome. He was confident of victory, for he had received a prophecy: “On this day the enemy of Rome shall perish.” He took it as a good omen, for certainly, god meant Constantine when they spoke of “enemy of Rome.” So confident was Maxentius that he made no plan for retreat. His only avenue of escape was over the narrow Milvian Bridge, which spanned the Tiber.

Before the battle, Constantine had a dream or a vision, He saw a strange sign in the heavens and heard the words en toutoi nika – Greek for “In this, conquer.” (The Latin is sometimes rendered as In hoc signo vinces, “In this sign you will conquer.” Constantine ordered that a new imperial standard bearing the sign be made immediately and that the mysterious sign be painted on the shields of all his troops. The sign was formed from two Greek letters, chi (X) and rho (P), the first two letters of the title ‘Christ” (XPISTOS – CHRISTOS) in Greek.

Through it was smaller, Constantine’s army routed Maxentius’ dispirited troops. Then ran from the field, trying to retreat over Milvian Bridge. So many people were fleeing across the bridge that thousands were thrown into the river from the narrow span and died in the flood waters of the Tiber. Maxentius himself, the “enemy of Rome,” perished that day in the river. Constantine was victorious – and was now the new Augustus of the Western Roman Empire.

Together with his ally and brother-in-law Licinius, the Augustus of the west, the two Augusti joined in issuing a new edict of toleration, the Edict of Milan, in 313 A.D. This edict granted freedom of worship to all religious groups within the empire, making special mention of the Christians:

Alternatively, some non-Catholics will assert that the Catholic Church began in 325 when Constantine called the First Council of Nicaea.

Those who posit that Constantine founded the Catholic Church either with the Edict of Milan or by calling together the First Council of Nicaea are unable prove their claim. There is no documentation from that time, either explicit or implicit by historian or theologian that even hints that such an event transpired or was the intention of Constantine or the bishops of the Catholic Church to transpire.

This story, most famously told by Jehovah Witnesses and Fundamentalist Protestants came out of their necessity to support their lie that there was an apostasy in the early Church. It is their way to explain how their reform and late arrival is justifiable. The myth is that because the Church of the Apostles fell into apostasy, a remnant of the true and orthodox believers of Jesus remained hidden from and often persecuted by the Catholic Church until THEY brought the reform and true faith back. Prior to the rise of Protestantism, no one ever dared to tell this lie. Only in the space of the unintelligent, uncurious, and hostile can such a myth and lie bear fruit.

Consequences of the Failed Synod: The Reformation of Pope Francis - Part IV 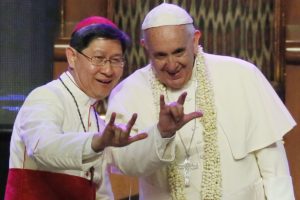