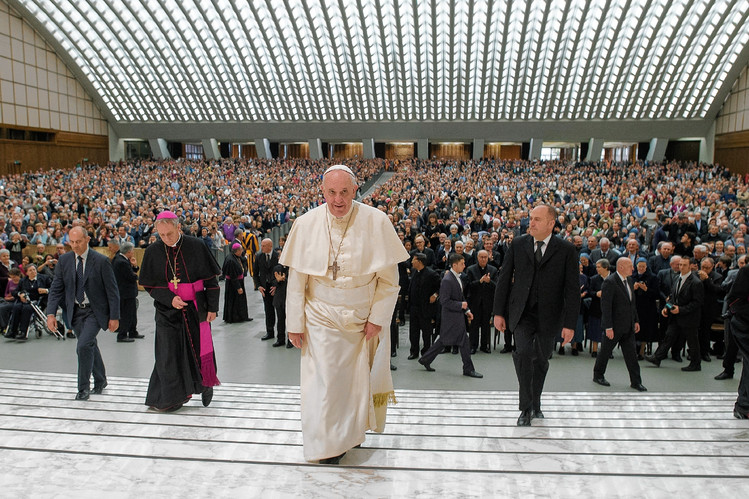 On October 17, 2015, at Paul VI Audience Hall in Vatican City Pope Francis gave an ‘Address at Commemorative Ceremony for the 50th Anniversary of the Synod of Bishops ‘ contains what I believe to be the most concerning Ecclesiology that has ever been published by a Bishop of Rome.

This is the first time that the Bishop of Rome has ever issued a new expression of Ecclesiology and the Primacy of the Roman pontiff that diverges from, if not contradicts, Vatican I’s ‘First Dogmatic Constitution on the Church of Christ’ and Vatican II’s ‘Lumen Gentium’.

A Little Background on the Synod of Bishops

From the Greek “coming together,” the Synod of Bishops is the fruit of Pope Paul VI and the Second Vatican Council, institutionalized on September 15, 1965 to be an ongoing collaboration by which a selection of bishops, representing the Catholic episcopate, would remain personal and in union to help the Pope govern the universal Church by rendering their counsel.

Announcing the news to the Vatican II fathers, the Pope Paul VI said: “We intend to give you some institution, called for by this council, a ‘Synod of Bishops,’ which will be made up of bishops nominated for the most part by the episcopal conferences with our approval and called by the Pope according to the needs of the Church, for his consultation and collaboration, when for the well-being of the Church it might seem to him opportune.

The Synod of Bishops vs. the Synodal Church

We can’t just gloss over the fact that there has been a new term inserted by Pope Francis into the lexicon of Catholic Ecclesiology; this word is ‘Synodal Church,’ which doesn’t have any place in the proposition of Pope Paul VI, nor in sacred Tradition or Scripture. There is a clear distinction here between Paul VI’s body of bishops gathered together in an administration to help the Pope govern versus a body of bishops gather together in a kyriakos/ekklésia to governing in equal union with the Pope.

According to Pope Francis’ new Ecclesiology the Synodal Church has Three Marks:

The only time this document mentions the word ‘truth’ is in the first Mark of the Synodal Church where Pope Francis writes that the Faithful people, the College of Bishops, and the Bishop of Rome are all listening to each other, but also to, “the “Spirit of truth” (Jn. 14:17), to know what the Spirit “is saying to the Churches” (Rev 2:7)”. Yet, in this regard, the Synodal Church doesn’t seem to be doing anything that the Protestant Churches aren’t doing in their Synods and Conferences where they have voted on and accepted every variety of Satan’s feces.

I appreciate the idea of having a hierarchy in the Catholic Church that listens, but the beauty of the Catholic Church is that She listens not over a course of year or decades or generations, but, rather, over a course of centuries. Indeed, gathering a bunch of bishops together to listen to everyone presupposes that Eve could have listened to the Serpent without being tempted to act contrary to her nature. It also presupposes that this Synodal Church would not become Gnostic; gathering as She does handpick clerics to promote their own agendas, rather than gathering together the whole Universal Church as is done in Ecumenical Councils.

Being that the Synodal Church will only hear only what it wants to hear (rather than to the whole Universal Church as is done in an Ecumenical Council), it seems to be doomed to issue Apostolic Exhortations that are grounded not in the Deposit of Faith, but, rather, in the sedimentary deposits of post-Christian thoughts that the Synodal fathers will be listening and responding to.

I’m open to hearing other thoughts about this new Ecclesiology of Pope Francis, but from what I’ve read, it seems to me that this new ‘Gerontocracy’ Synodal Church no longer fits all (arguable ‘any’) of the Theological Marks of the Church that Jesus promised that the gates of Hell would not prevail against (Matthew 16). This Synodal Church is not Holy, Catholic, or Apostolic. At the very least it is Human, Gnostic, and Peculiar.