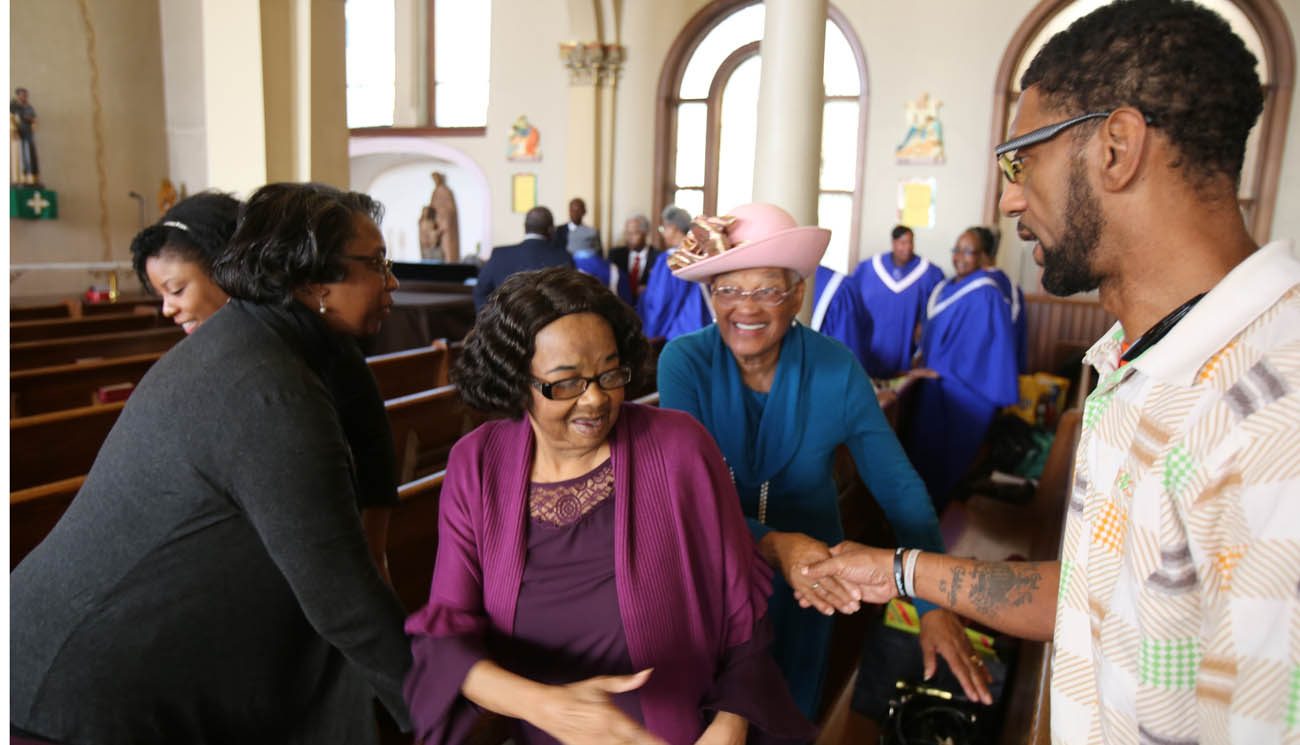 ne of the early manuscript reviewers of my book The Divine Symphony: An Exordium to the Theology of the Catholic Mass was my oldest daughter Daeleon. In consideration of the fact that I helped her pay for her B.A. Degree in English, I thought she could return Dad the favor. After she returned the marked-up manuscript, I called her and asked what she liked most about it, and she commented about how it was interesting to learn about how the symphony orchestra can be used as a compelling analogy to explain the Mass, “but what I found most interesting,” she said, “was how Black Catholic Churches are doing the sign of peace all wrong. They aren’t supposed to be doing that.”

What Daeleon was referring to was my section in my book where I explain the history, meaning, mystery, and Church teaching on ‘the Sign of Peace’, and how it is one of those movements of the Divine Symphony that has been continually abused throughout the history of the Church. It has been our experience that the exchange of ‘the Sign of Peace’ in predominately Black Catholic Churches is completely contrary to this instruction received in the 2004 Redemptionis Sacramentum from the Congregation for Divine Worship and the Disciple of the Sacrament:

An exchange of ‘the Sign of Peace’ “only to those who are nearest and in a sober manner” is certainly not the practice in any predominately Black Church I’ve ever visited. There, what transpires for a lengthy amount of time during ‘the Rite of Peace’ more closely represents what happens at a family reunion or a social gathering of friends where people casually meander around and exchange glad-hands, happy wishes, and worldly chatter. It is not to say that the abuse of ‘the Sign of Peace’ is endemic to all predominately Black Catholic Churches, or even that it is a tendency/tradition owned by the Black Catholic Church alone, but it is to say that it is the only place where we have witnessed it descends into being something casual and trivial, rather than being somber and holy.

Very similar to the use of the orans posture by the laity at times when only the Priest should be standing with his arms outstretched, or the holding of hands during ‘the Our Father’, the abuse of ‘the Sign of Peace’ is one of the subjects that can have the danger of falling out of the sacred if the laity is not rightly instructed and protected regarding its prescription.

Yet, as I stated earlier, there has been a very long history in the Catholic Church regarding the abuse of subject in the Divine Symphony. For nearly two thousand years, going back to when the exchange of ‘the Sign of Peace’ was not an embracing hand or a bow, a ‘holy Kiss’, the Church has repeatedly called for the need for uniformity and protection from error over ‘the Rite of Peace’. In 175 A.D. Saint Athenagoras warned that we should give the most exceptional care to guard our bodies against defilement and corruption, “If anyone kisses a second time because it has given him pleasure, he sins.” Twenty years later Saint Clement of Alexandria cautioned, “Love is not proved by a kiss, but by a kindly feeling. But there are those who do nothing but make the Churches resound with a kiss, not having love itself within. For this very thing, the shameless use of a kiss (which should be mystical), causes foul suspicions and evil rumors. The Apostle calls the kiss holy.” By 390 A.D. we find in the Apostolic Constitutions:

I don’t know who would be surprised to learn that even in the fourth century there were unruly children at Mass, but no one should be surprised that people have always taken advantage of opportunities to corrupt the liturgy; to take what is beautiful and make it ugly; to take what is Divine and make it an occasion for sin and scandal. For this reason, Bishops, Priests, Deacons, Religious, and the People do a good and holy thing when they fight to keep the Divine Symphony free from disorder.

If we truly knew and believed that the Mass is Holy, we would treat it as such and would refuse to carry any of our casual behavior and worldly practices in the Divinely magnanimous and transformative encounter with the Triune God.

The Secrets of the Catholic Mass

How I Prayed and Fasted My Wife into the Catholic Church