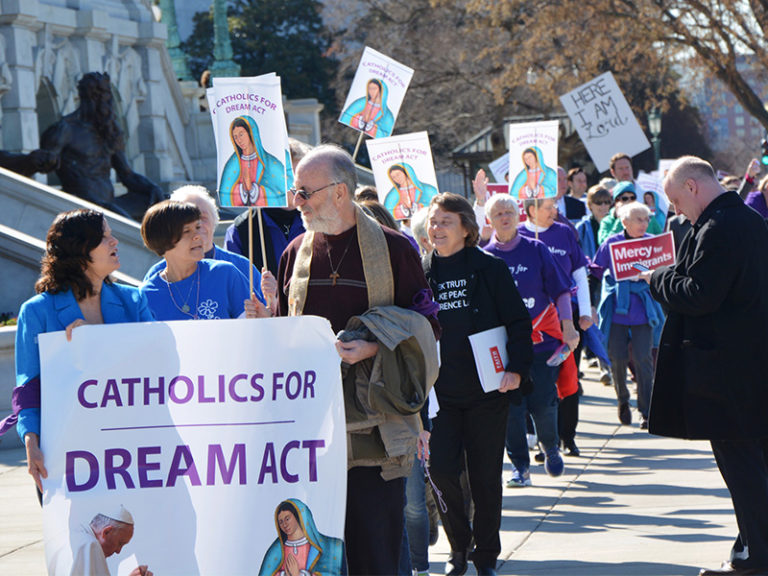 othing can cripple the use of the intellect, reason, and logic faster than images and words that stir the imagination of our emotions. For evidence of this, one need not look any further than the recent cries for the government not to separate children from their parents. How horrific are those words and images that the stirs the imagination of our mind and in the heart? Even, for some, hearing about a child being ripped from the womb of its mother by Sopher clamps and a vacuum holds nothing in comparison to an immigrant teenager being put in a separate holding facility while parentage is being validated; that is, according to the weaponized media, the Donald Trump administration is separating children from their parents to punish them and that is mean.

Even American Catholic bishops, religious orders, parishes, and lay organizations have gotten themselves intertwined into this political standoff of emotions and imagery versus law and due process. Organizations such as the Catholic Apostolate Center (a ministry of the Society of the Catholic Apostolate) have created webinars to educate Catholics on how to assist/coach people to cross the border illegally and help them in assimilating in this country. Listen to my Podcast addressing the horrendous theology and false attribution of Church teaching in the webinar.

As someone who has worked with illegal immigrants and with DACA recipients as a contractor for Children’s Services, I know very well the pain that many of them suffer by having to live a life of uncertainty, living in the shadows to avoid jail and deportation, and having a future riddled with insurmountable barriers. I find it terribly myopic why any good person would assist people in committing a crime to come into this country, only to have them live a life dealing with continual stress, anxiety, and heartbreak. It’s amazing that the clear solution to help people stay in their own country by making it safe and providing it with opportunities for education is never offered. No, let’s just let their country die and we’ll take them in here…

Nevertheless, as it is with many issues where reason and logic are trumped by emotions and political agendas, two camps have emerged in many countries today that can do nothing but talk past each other. One group is wanting nothing to do with national borders and desiring all humans the opportunity to live their best possible life. The other side is desiring the right to choose who gets the opportunity to enjoy the fruits of their sovereign nation and the right to enforce the laws that were written for the common good of all citizens.

Catholics belonging to the former group have continually undermined the type of adult-level dialogue needed to mend our divisions by their usage, weaponizing, and misappropriation of historical accounts in Scripture (e.g. the Holy Family fleeing to Egypt – Cf. Mt. 2:14-15) as a moral standard; despite that fact that like most historical accounts in Scripture, God never qualifies it morally – it’s just documented history. They continually edit Jesus’ statement of being the man who was naked, in prison, and hungry, by attaching it to Jesus being an immigrant as well (Cf. Mt. 25:3-46). They have continually been very liberal in their readings of Rerum Novarum, Exsul Familia, and Pacem in Terris to make a false case that Popes Leo XIII, Pius XII, and John XXIII, respectively, were also talking about illegal immigration, which they were not.

How can you resolve serious issues with people who are not interested in being honest? You can’t. You’re better off arguing with a six-year-old as to why they can’t have ice cream for dinner. The child isn’t interested in the ‘why’. Rather, they are only interested in what they want, and they cannot be reasoned with. Similarly, if political agendas did not use people’s unchaste emotions to create divisions, mantras, and platforms, it would not be politics. It would be something else; something truly worthwhile, such an agenda for the common good.

Indeed, there is a clear path forward in this conversation for both sides to move towards a resolution that is good for all people. First, both sides need to admit that immigration law, border control, illegal crossing of the border, nor living in a country illegally, are intrinsically evil. That is, by their nature, none of these things are always/unconditional immoral. In fact, there are plenty of examples in Divine law and natural law where we can argue for their existence or non-existence. For example, there is a great deal of border security and admission standards for Heaven, Purgatory, and Hell. The Church Herself has admission controls for the Sacraments; everyone cannot just walk up and receive the Holy Eucharist. Nature has borders; humans cannot naturally live underwater or in space. Nature has natural physical boundaries that are difficult, but not insurmountable to cross. Nature also has biological boundaries between the procreation of the species.

Therefore, not only is border control and immigration law not intrinsically evil, there is some evidence of it being a part of the Divine and Natural Law. Yet, inasmuch as these laws may not always be intrinsically evil, objectification, on the other hand, is always contrary to the teachings of Jesus Christ. Truly, we must see the illegal immigrant as a human and ask them the important philosophical (not geographical) questions, such as how did you get here, where did you come from, and where are you going. The answer to these questions would inform us that immigration law and border control must be joined and balanced with charity and assisting people in a manner that gives them dignity, as well as hope and reason to believe that they don’t have to flee their own home.

Rather, let us all be the presence and peace of Christ Jesus to all people and at all times, and let us not forget that our Lord’s first ministry was to His own People, but not at a disadvantage to those outsiders who came to Him for help.

My #WalkAway Story from the Democratic Party (Cult)

The Historical Reliability of Mary, Martha, and Lazarus (John 11:1-44)