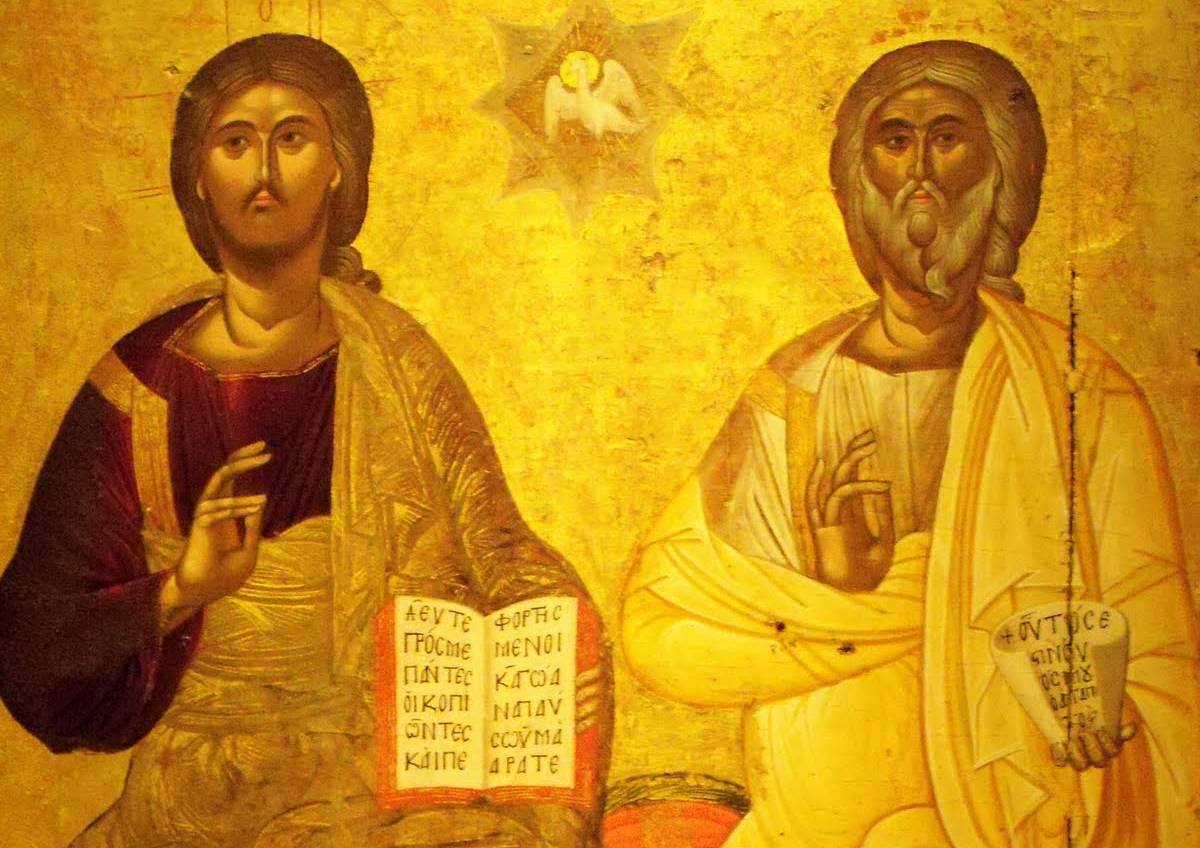 he creeds pronounced at the Councils of Nicaea and Constantinople are not the earliest instances of the declarative statements by the fathers about the nature, personhood, life, and works of the Triune Godhead, but they do provide a well-organized place to begin the discussion about what the Church believes about the nature of God and His Church.

The creed of Nicaea, representing a joint effort of the Fathers of the Council,[1] was the first time in history that the Catholic Church officially spoke on the preexistent nature of the Church, immediately prior to their announcement of anathemas:

We believe in One God, the Father Almighty, Creator of all things visible and invisible; and in One Lord Jesus Christ, the Son of God, begotten as the only -begotten of the Father, that is from the essence [ousia] of the Father, God from God, Light from Light, true God from true God, begotten, not created, consubstantial [homo-ousios] with the Father, through Whom [i.e. the Son] all things were made, both in heaven and earth; Who for us men and for our salvation came down and was incarnate, was made Man; Who suffered and rose again on the third day, ascended into heaven, and shall come again to judge the living and the dead; and in the Holy Spirit. – But those who say, ‘There was a time when He [the Son] was not, and ‘He was not before he was made;’ and ‘He was made out of nothing,’ or ‘He is of another substance’ or ‘essence,’ or ‘The Son of God is created,’ or ‘changeable,’ or ‘alterable’— they are condemned by the holy catholic and apostolic Church.

It seems that the first of the five opposition statements (‘There was a time when He was not’) were inserted here primarily to defend the Holy Spirit against claims that He was created and not truly God in nature and being.[2]  Yet, in these negative statements is also found the positive argument for the First Historical Mark of the Catholic Church.  That is, being that the Church proceeds from the eternal life and mission of the Holy Spirit, we can rightly join the creed in saying that there was never a time when the Church was not.

Attributed to the First Council of Constantinople by the Council of Chalcedon in A.D. 451, the Nicene-Constantinople creed actually predates the A.D. 381 council by at least seven to twenty years and was recited in its entirety by Epiphanius of Salamis in his A.D. 374 Ancoratus.[3]  Both of these creeds omit nothing from the creed of Nicaea, but add more to Second Person of the Holy Trinity (e.g. “according to the Scriptures”, “and is seated at the right of the Father”, “in glory”, “whose kingdom there will be no end”).  Most especially, they have a great deal to say about the preexisting and supernatural nature of the Church in the Holy Spirit:

And in the Holy Spirit, the Lord, the Giver of life, who is proceeding from the Father, who together with the Father and the Son is adored and glorified, who spoke through the prophets.  In one holy, catholic, and apostolic Church; we confess one Baptism for the remission of sins, and we await the resurrection of the dead and a life of the age to come. Amen.

What the creed offers here is a construct in three sections by which the Church instructs the world to know the triune nature, personhood, life, and works of the Father, Son, and Holy Spirit.  In regards to the Father, the first thing we need to know about Him is the same thing Jews knew about YHWH from the first paragraph of the Shema, “Here, Israel, the Lord is our God, the Lord is One.”[4]  This is a fundamental expression of our faith and belief in the nature of God; that He is neither subordinate nor divided – He is one.  That this one God is rightly called Father Almighty bespeaks of eternal primacy above all of His household and of His creative power to bring life where there was none.

Out of this nature of unity and personhood best described as Eternal Father, His life and works springs forth, which He desires to share by bringing to life, in love those things that are visible and invisible; the first of which is His Only-begotten Son – begotten in His oneness, and, therefore, rightly called One Lord Jesus Christ, the Son of God.  There is nothing new about the nature of the Son that is not of the Father. For, He is eternal (“before all ages”), Light of Light, God from God (or Very God of Very God), truly from the God, rather than being created (“Begotten, not made), and, therefore, truly of the same substance (“consubstantial”) with the Father, but distinct in personhood because the Son is not the Father (“by whom all things were made”).

A disambiguation of this second section of the creed can also explain how and why only divine love flows from out of the nature of God.  For, out of this nature and unity with His Eternal Father and personhood of being the Son of God, comes forth His life and works, which is for the salvation of man for whom He came down from heaven, and was incarnate of the Holy Spirit and the Virgin Mary, as was made man; and was crucified also for us under Pontius Pilate for our sake, and suffered and was buried and rose again on the third day, in accordance with the Scriptures, and ascended into heaven, and now sits at the right hand of the Father. In continuance with His life and works, He shall come again with glory to judge the living and the dead, and His kingdom will participate in His eternal nature.

Before we discuss the third and final section, let us recapitulate the formula of the creed that has thus far been revealed.  The previous two instructions about the Father and the Son both informed us about the names by which the first two persons of the Holy Trinity are rightfully called; Father Almighty and Lord Jesus Christ.  They also highlighted the origin and personhood of the Father and Son; God is one – He has no source of being and Jesus Christ is His Only-begotten Son.  Next, the creeds instruct us about the life and works of the Father and the Son; God is the creator and the Son is for the salvation of man.

With this pattern in place, it would then seem to, therefore, follow that the final paragraph will also instruct us on the name, origin, personhood, life, and works of the third person of the Holy Trinity.   It would not logically follow that the creed would include a fourth person or some other entity that is somehow not in relation to the one nature of God.

The final section of the creed begins: “And in the Holy Spirit, the Lord, the Giver of life, who is proceeding from the Father, who together with the Father and the Son is adored and glorified.”[5]  The section alone follows the established pattern in the creed by addressing the name by which the Third Person is rightfully called, Holy Spirit (Ghost); His origin and personhood springs forth from the one divine substance of the Father and the Son, out of which He proceeds and through which He shares in glory and adoration.

The remainder of the third section of the creed is an instruction about the life and works of the Holy Spirit, which is to unify and gather the people of God into the one communion through which Jesus Christ effects His work of salvation.  This gathering can uniquely be found whenever and wherever the Holy Spirit spoke through the prophets and finally culminated in the One, Holy, Catholic, and Apostolic Church.  It is through this covenantal gathering of the Holy Spirit by which man cooperates with Jesus Christ in his salvation by receiving one Baptism for the forgiveness of sins, which prepares him and gives him hope for the resurrection of the dead and the life in the age to come.

These two early creeds are more than simple confessions recited at the Sacrifice of the Mass.  On the contrary, they are the resolutions of the Fathers of the Church in response to the Arian and Neo-Arian heresies concerning the origin, nature, life, and works of the three persons of the Holy Trinity, and it is fitting that Catholic Church should be included in the creeds as part of the life of the Holy Spirit, “For where the Church is, there also is God’s Spirit; where God’s Spirit is, there is the Church and every grace.”[6]  It is just as impossible to speak of the Church without speak of Christ, as it is to speak of Christ without speaking of His Church because the former participates in the nature of the latter.

Indeed, the Nicaea-Constantinople creed discloses in the clearest language possible at the time that the Church is both a divine and human institution that consists of two natures; one divine and one human; a nature that has descended to save and a nature that is necessarily being saved.

[1] The fathers are not in wholly agreement on who was the principal author of the Creed of Nicaea.  According to St. Basil it was authored by Hermongenes of Caesarea in Cappadocia, later a Bishop, who was at the council in the capacity of Deacon and who was secretary wrote the agreed upon Creed and read it aloud on June 19, 325.  Yet, according to St. Hilary, it was Athanasius who authored the final Creed in response to the Arian heresy, but Athanasius, who was in the best position to know the author, states that Ossius of Cordova was its principal contributor.  Jurgens, William A. The Faith of the Early Fathers: The Liturgical Press, Collegeville, Minnesota. 1970. 281. Print.  Laux, John. Church History. Tan, Charlotte, North Carolina. 1989. 112. Print.

[5] Latin version of the Nicene-Constantinople Creed and the traditional Latin teaching of the procession of the Holy Spirit, “who proceeds from the Father AND the Son . . .”