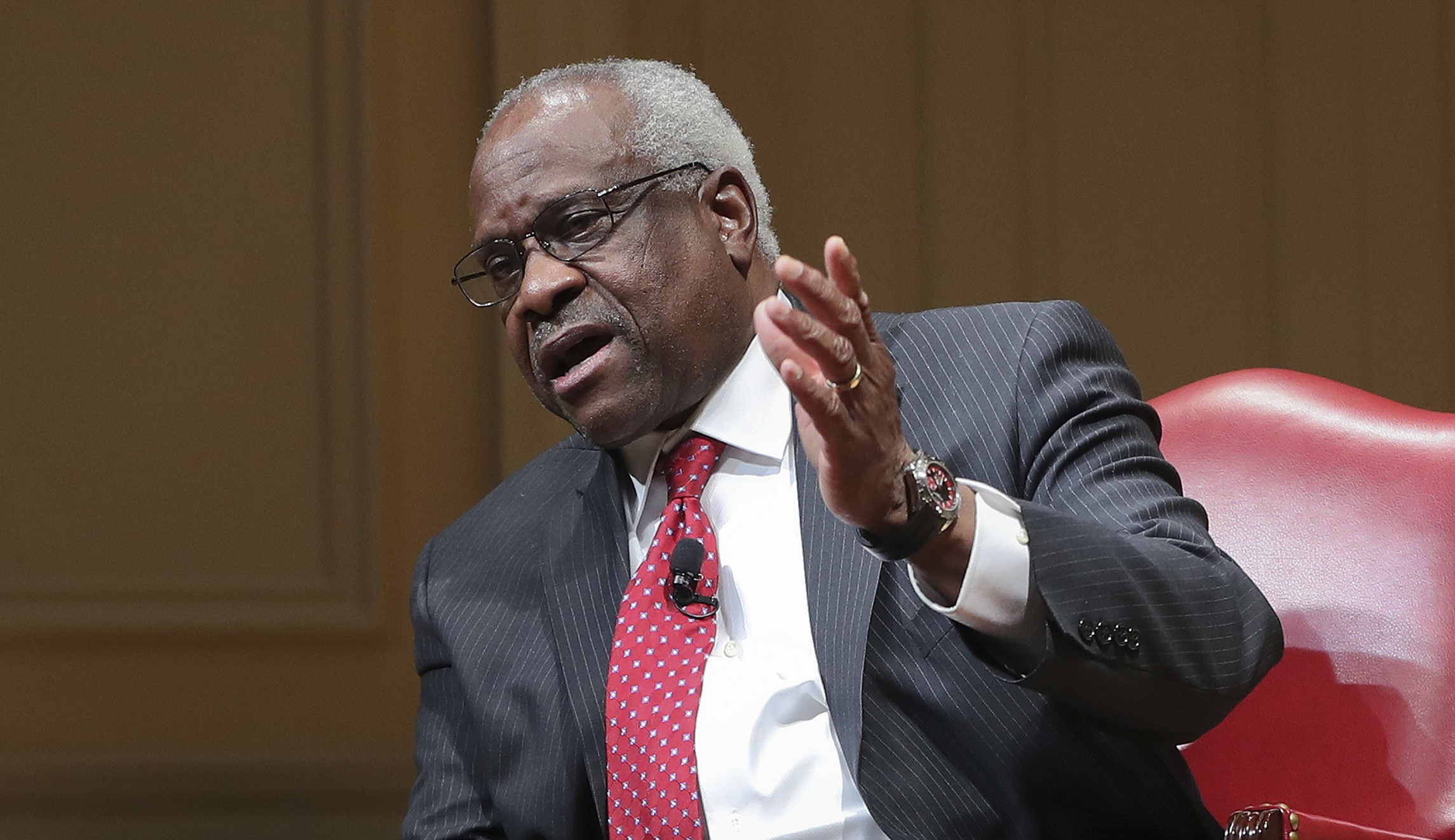 he Justice Clarence Thomas dissent below in the United States Supreme Court decision not to hear Kansas and Louisiana’s appeals defending their efforts to cut off Medicaid funds to Planned Parenthood (effectively forcing taxpayer funding of abortion) is legendary and needs to read, studied, and framed in the classroom of every law school that believes in the Constitution of the United States of America. BOLD added for emphasis/importance.

SUPREME COURT OF THE UNITED STATES

ON PETITION FOR WRIT OF CERTIORARI TO THE UNITED STATES COURT OF APPEALS FOR THE FIFTH CIRCUIT No. 17–1492.

The petition for a writ of certiorari is denied.

JUSTICE THOMAS, with whom JUSTICE ALITO and JUSTICE GORSUCH join, dissenting from the denial of certiorari.

One of this Court’s primary functions is to resolve “important matter[s]” on which the courts of appeals are “in conflict.” Sup. Ct. Rule 10(a); e.g., Thompson v. Keohane, 516 U. S. 99, 106 (1995). This case and Andersen v. Planned Parenthood of Kan. and Mid-Missouri, No. 17– 1340, present a conflict on a federal question with significant implications: whether Medicaid recipients have a private right of action to challenge a State’s determination of “qualified” Medicaid providers under 42 U. S. C. §1396a(a)(23) and Rev. Stat. §1979, 42 U. S. C. §1983. Five Circuits have held that Medicaid recipients have such a right, and one Circuit has held that they do not.[1] The last three Circuits to consider the question have themselves been divided.

This question is important and recurring. Around 70 million Americans are on Medicaid, and the question presented directly affects their rights. If the majority of the courts of appeals are correct, then Medicaid patients could sue when, for example, a State removes their doctor as a Medicaid provider or inadequately reimburses their provider. E.g., Bader v. Wernert, 178 F. Supp. 3d 703 (ND Ind. 2016); Women’s Hospital Foundation v. Townsend, 2008 WL 2743284 (MD La., July 10, 2008). Because of this Court’s inaction, patients in different States—even patients with the same providers—have different rights to challenge their State’s provider decisions.

The question presented also affects the rights of the States, many of which are amici requesting our guidance. Under the current majority rule, a State faces the threat of a federal lawsuit—and its attendant costs and fees— whenever it changes providers of medical products or services for its Medicaid recipients. E.g., Harris v. Olszewski, 442 F. 3d 456 (CA6 2006). Not only are the lawsuits themselves a financial burden on the States, but the looming potential for complex litigation inevitably will dissuade state officials from making decisions that they believe to be in the public interest. State officials are not even safe doing nothing, as the cause of action recognized by the majority rule may enable Medicaid recipients to challenge the failure to list particular providers, not just the removal of former providers. E.g., Kapable Kids Learning Center, Inc. v. Arkansas Dept. of Human Servs., 420 F. Supp. 2d 956 (ED Ark. 2005); Martin v. Taft, 222 F. Supp. 2d 940 (SD Ohio 2002). Moreover, allowing patients to bring these claims directly in federal court reduces the ability of States to manage Medicaid, as the suits give Medicaid providers “an end run around the administrative exhaustion requirements in [the] state’s statutory scheme.” 876 F. 3d 699, 702 (CA5 2017) (Elrod, J., dissenting from denial of rehearing en banc).

Finally, the disagreement over §1396a(a)(23) implicates fundamental questions about the appropriate framework for determining when a cause of action is available under §1983—an important legal issue independently worthy of this Court’s attention. The division in the lower courts stems, at least in part, from this Court’s own lack of clarity on the issue. As one court observed, the disagreement “can be explained in part by an evolution in the law,” Does v. Gillespie, 867 F. 3d 1034, 1043 (CA8 2017)—a tactful way of saying that this Court made a mess of the issue. We have acknowledged as much, explaining that language in our early opinions could be “read to suggest that something less than an unambiguously conferred right” can give rise to a cause of action under §1983, and that “[t]his confusion has led some courts” astray. Gonzaga Univ. v. Doe, 536 U. S. 273, 282–283 (2002). We have “[f]uel[ed] this uncertainty” by equivocating on whether the standards for implying private rights of action have any “bearing on the standards for discerning whether a statute creates rights enforceable by §1983.” Id., at 283. Courts are not even able to identify which of our decisions are “binding”; in Planned Parenthood of Kan. v. Andersen, 882 F. 3d 1205 (CA10 2018), the Court of Appeals applied a decision that this Court recently said had been “‘plainly repudiate[d].’” Id., at 1229, and n. 16 (quoting Armstrong v. Exceptional Child Center, Inc., 575 U. S. ___, ___, n. (2015) (slip op., at 9, n.), in turn citing Wilder v. Virginia Hospital Assn., 496 U. S. 498 (1990)). One can hardly blame the Tenth Circuit for misunderstanding. We created this confusion. We should clear it up.

So what explains the Court’s refusal to do its job here? I suspect it has something to do with the fact that some respondents in these cases are named “Planned Parenthood.” That makes the Court’s decision particularly troubling, as the question presented has nothing to do with abortion. It is true that these particular cases arose after several States alleged that Planned Parenthood affiliates had, among other things, engaged in “the illegal sale of fetal organs” and “fraudulent billing practices,” and thus removed Planned Parenthood as a state Medicaid provider. Andersen, 882 F. 3d, at 1239, n. 2 (Bacharach, J., concurring in part and dissenting in part). But these cases are not about abortion rights. They are about private rights of action under the Medicaid Act. Resolving the question presented here would not even affect Planned Parenthood’s ability to challenge the States’ decisions; it concerns only the rights of individual Medicaid patients to bring their own suits.

Some tenuous connection to a politically fraught issue does not justify abdicating our judicial duty. If anything, neutrally applying the law is all the more important when political issues are in the background. The Framers gave us lifetime tenure to promote “that independent spirit in the judges which must be essential to the faithful performance” of the courts’ role as “bulwarks of a limited Constitution,” unaffected by fleeting “mischiefs.” The Federalist No. 78, pp. 469–470 (C. Rossiter ed. 1961) (A. Hamilton). We are not “to consult popularity,” but instead to rely on “nothing . . . but the Constitution and the laws.” Id., at 471.

We are responsible for the confusion among the lower courts, and it is our job to fix it. I respectfully dissent from the Court’s decision to deny certiorari.

Introduction to the Theology of the Mass (The Entrance)

Introduction the Theology of the Mass (The War of Two Liturgies)