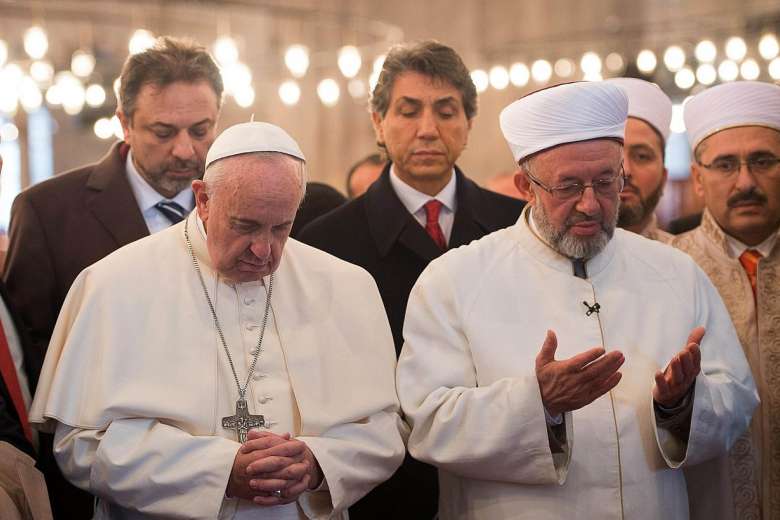 n 4 February 2019 Pope Francis and the Grand Imam of Al-Azhar, Ahamad al-Tayyib, signed a document on “Fratellanza Umana per la Pace Mondiale e la convivenza comune… Human Fraternity for world peace and living together”. The one paragraph of this document that has caused the most interest among Catholics is this one below (emphasis in bold):
Freedom is a right of every person: each individual enjoys the freedom of belief, thought, expression and action. The pluralism and the diversity of religions, color, sex, race, and language are willed by God in His wisdom, through which He created human beings. This divine wisdom is the source from which the right to freedom of belief and the freedom to be different derives. Therefore, the fact that people are forced to adhere to a certain religion or culture must be rejected, as too the imposition of a cultural way of life that others do not accept;

On BigPulpit.COM I came across Fr. John Zuhlsdorf’s response to this paragraph in a blog entitled, Francis signed document saying that God willed the “pluralism and diversity of religions.” What’s up with that?. In that blog article, Father Z begins his conversation by saying, “We must seek a way to understand this without it sounding like heresy,” before he goes on to explain how it is that we can understand this paragraph in union with what the Church teaches.

While Saint Anselm did define theology as ‘faith seeking understanding,’ it has always been presupposed by theologians that nothing should be off the table in our search for truth and understanding; including whether something turns out to be heresy or not. In the instant case, Father Z’s analysis and conclusions were flawed because he voluntarily restricted himself from entertaining the heresy of indifferentism. While I appreciate his concern that since 2013, we have bandied about the word ‘heresy’ regarding Pope Francis to the point now that it is like saying water is wet, we still have to remain vigilant in calling ideas and concepts what they are. We can always speak truth to ideas and actions, without necessarily condemning the person, if that is the concern.

Regarding the ‘ecumenical’ paragraph above that was signed by Pope Francis, it does not take much effort at all to notice that this is a clear example of the heresy of indifferentism which is the idea that all world religions have an equal chance at getting someone to heaven. In his In Satis Cognitum Pope Leo XIII wrote, “The mission of Christ is to save that which had perished: that is to say, not some nations or peoples, but the whole human race, without distinction of time or place.” Indifferentism offers a competing idea; that no religion is unique, exceptional, or wholly true, but, rather that they all offer an equal path to the same truth. Indifferentism is essentially a fruit of polytheism, the sister of relativism, and the foundational basis upon which bodies like Protestantism and Freemasonry spread throughout the world.

Father Z’s is attempting to explain the aforementioned paragraph through the construct of ‘God’s permissive will’; whereby God has given His creatures the ability to freely choose to love or to hate. Regardless of their choices, God reconciles all of creation to Himself; His will is always done on earth as it is in Heaven. It was this will, according to Father Z, that God has willed (i.e. allowed) the pluralism of religion.

On the plain surface, there is not anything in that construct to oppose, but the first problem is that that is NOT at all what the paragraph states. What is said in the text is that, “The pluralism and the diversity of religions, colour, sex, race and language are willed by God in His wisdom, through which He created human beings.” Why is religion, mixed in with color, sex, and race? Some of these things are not like the other. Is sex something that God’s permissive will allows man to create a plurality and diversity of? Is race and skin color something you are born into/with or is it something that God’s permissive will allowed man and his freedom to create a plurality and diversity of? If the Tower of Babel in Genesis is a true story (Cf. Gen. 11:1-9), and we believe it is, then language isn’t even something we can say that man in his freedom created through God’s permissive will; that diversity was intentionally, not permissively, willed by God alone.

The second problem is also found in the words themselves. Where it says, “. . . are willed by God in His wisdom, through which He created human beings.,” Again, notice how the things like religion, color, sex, race, and language are mixed in with the creation of human beings.” Are we supposed to believe that the same will by which God has allowed a diversity of man-made religions, He also willed the creation of Adam and Eve? It seems to be that when “God said, Let us make man in our image, after our likeness: and let them have dominion over the fish of the sea, and over the fowl of the air, and over the cattle, and over all the earth, and over every creeping thing that creepeth upon the earth. So God created man in his own image, in the image of God created he him; male and female created he them” (Gen 1:26-27), that it was a very intentional act that was not left to man’s freedom through God’s permissive will.

I’m not going to spend too much time picking apart this paragraph. Simply put, it is an expression of indifferentism that rejects the exceptionalism and divine uniqueness of the Catholic Church. Theologically, it’s clumsy and awkward in the way that it groups unrelated terms. Father Z doesn’t help by confusing God’s permissive will with his perfect/intentional/divine will. I do appreciate Father Z trying to move away from the easy answer that you’ll always find at websites like Canon212.COM and OnePeterFive.COM, that this is HERESY, but his blog essay isn’t good or helpful. We cannot seek a way to understand without being fully open to understanding.

The Orientation of Catholic Mass (The Divine Liturgy)