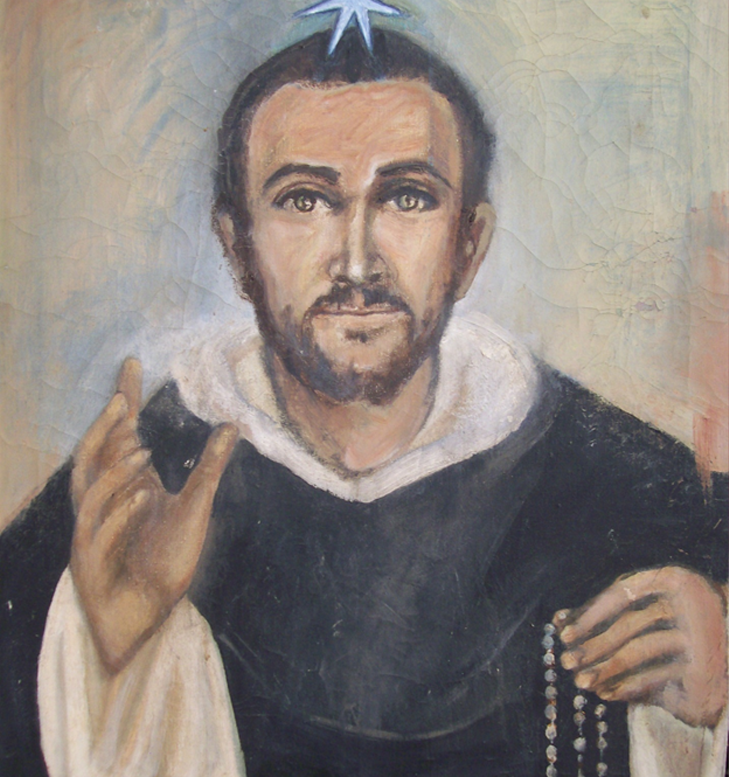 Named after Saint Dominic of Silos, Dominic was born in Caleruega, Spain in 1170 to a mother whose womb was thought to be barren. The story is that while on a pilgrimage to Silos she dreamed that a dog leaped from her womb carrying a torch in its mouth and “seemed to set the earth on fire”. The future founder of the order that would be nicked named ‘Dog of the Lord’ (Lat. Dominicanis), would go on to receive a good education as a youth and onto university; devoting his studies to the arts and theology. While there it is recorded that in 1191, while Spain was suffering from a famine, Dominic gave away his money and sold his clothes, furniture, and manuscripts to feed the hungry; stating, “Would you have me study off these dead skins when men are dying of hunger?”

In 1194, while he was around the age of twenty-five, he joined the Canons Regular in the canonry of Osma, following the rule of Saint Augustine. In 1215, Dominic, along with six other companions, decided begin following monastic rules of prayer and penance. They also sought and received permission from their bishop to preach through the territory of Toulouse. By 1216 they had secured permission from Pope Innocent III for their work, and in January 1217 Pope Honorius III issued an order for Dominic’s community to be named “The Order of Preachers” (“Ordo Praedicatorum”, or “O.P.”). They would later come to be known throughout the world as the Dominican Order.

We usually celebrate the feast day of our saints on the day of their physical death, but that was never possible for Saint Dominic being that he died on the Feast of the Transfiguration on August 6, 1221. It is quite remarkable that a man who spent his life in devotion to pointing people to Jesus and Mary through the Rosary would continue to signal to us through the date of his death that his life was not about him – it was all about the Lord our God. Originally the date of his widely celebrated feast day was August 4th, but it was moved to the 8th after the liturgical reforms of the Second Vatican Council. Saint Dominic is known as the Patron Saint of Astronomers, which also makes him the unofficial Patron Saint of UFO watchers.

As for my personal friendship with Saint Dominic Deguzman, for as long as I can remember, going back to my teenage years, I had frequent nightmares of dogs chasing me. I would wake up screaming out of my sleep quite often. This fear of dogs in my dreams gave rise to a fear of dogs in real life. I hated having to walk anywhere because I thought there might be a dog somewhere loose just waiting to chase me. Yet, not long after I received the Sacrament of Confirmation on August 8, 2006, the Feast of Saint Dominic de Guzman, I had a dream that I’ll never forget. There were those same two black (sometimes white) dogs that had chased me in my sleep for the past two decades, but now they were sitting there calm on their hind legs just staring at me. It was night and there was a mist about, but under the tree, I could see a man in a black robe with a hood lined in white holding the dogs on a chain. It was over! Years later, I told my spiritual advisor about that dream; to which she was happy to inform me that Saint Dominic De Guzman and his ‘Hounds for the Lord’ had been chasing me down.

I do recall briefly considering Saint Dominic to be my confirmation name, being that it was on his feast day that I would be confirmed, but I really didn’t identify with him back then. I was still married and didn’t foresee myself becoming a priest. I didn’t see anything in his life that I could relate to. And David Dominic just didn’t sound good. I chose Saint Joseph and he has been a good patron to me ever since. After doing more study, later on, I did develop a devotion to Saint Dominic, and over the years since then not many a day has gone by that I haven’t asked him to pray for me. I began to identify with him through his love of the Rosary prayer to our Blessed Mother, and the call to preach the gospel. I also have a great love of the charism of the order he founded. In fact, the time I spent being a member of Saint Dominic’s Catholic Church in Youngtown, Ohio, and with the Dominican Friars, there was the most spiritually enriching time in my life. After moving to Columbus, Ohio, I transferred from Franciscan Steubenville University to Ohio Dominican University, and it was from there that I earned my Master’s of Arts in Theology.

There is this quote that is attributed to him that rings in my soul:

“I kept on digging the hole deeper and deeper looking for the treasure chest until I finally lifted my head, looked up and realized that I had dug my own grave.”

I’ve never met a man who was digging his own grave who didn’t know what he was digging. For some reason, we think if we keep digging we will eventually dig ourselves out. That plan never seems to work out well. It didn’t for me!

Saint Dominic is a great figure for us to look upon for considerations about humility, Marian devotion, simple living, sharing the Good News (true Charity), and penance. Therefore, let us imitate this great saint by sharing the teachings of Jesus with those around us, and by praying the Rosary daily. Let us also imitate him by practicing hours of penance by eating a very simple diet, observing periods of silence, and refusing luxury. It is clear from him and many other saints that these are some very simple keys to living a life that God can do powerful things with.

Saint Dominic Pray for Us!

The Biblical Teaching on Consolations (The Transfiguration)