The First Reading at the Divine Symphony today for the 33rd Sunday in Ordinary Time from Malachi 3:19-20A is better contextualized if we begin at v. 13 where we read about the Lord critiquing His People’s disappointment. They are disappointed in living this life; treating it as a funeral, because there does not seem to be an immediate gain in this life by serving God and obeying His laws. It is frustrating to them that they see the “arrogant blessed” and not only do evildoers prosper but even when testing God, they escape. The Lord then assured His People that He does keep in His memory those who fear Him and “and esteem His name.” “They shall be mine, says the Lord of host, my own special possession, on the day when I take action. And I will have compassion on them, as a man has compassion on his son who serves him.” In today’s reading, God reminds His people that, while the evildoers may seem to lead a comfortable life today, there is a day coming, “blazing like an oven when all the arrogant and all evildoers will stumble, And the day that is coming will set them on fire, leaving them neither root nor branch.” Then He says, But for you who fear my name, the sun of justice will arise with healing in its wings; And you will go out leaping like calves from the stall.”

Is not that a wonderful image of the Holy Mass? Christ, the Son of Justice arising – on the third day – with healing on His wings – “wings” an image of Christ Jesus’ arms spread out on the Cross. As for “leaping like calves from the stall,” if we truly believed the power and healing we receive through the liturgy and, most especially, through consuming the Holy Eucharist, we would be excited to be dismissed from the Mass; not because it took too long, or because we have something better today, but, rather, because we cannot wait to break back into the world to share with it what and who we have received through the liturgy.

The Second Reading from Second Thessalonians 3:7-12 shows a different way how Christians ought not to approach life in this world. While some of the People of the prophet Malachi’s time had to be reminded why they ought to persevere in the faith because the day of the Lord would come, some in the Church of Thessalonica had fallen to the sin of presumption; thinking that the coming of the Lord was very near. This idea of the near approach Parousia may have been part of the false teaching that the Church of Thessalonica received from those who they thought were associated with the Apostolic Church. In response, the Apostle Saint Paul reminds the People of example of work and industry that the fathers of their Church set for them and commands them in the name of Jesus Christ to imitate them in this way and to “keep away from any brother who is living in idleness and not in accord with the tradition that you received from us” (v. 6).

Paul sounds so completely judgmental, does he not? He was essentially saying, ‘There are some bad people living among you who call themselves Christians. They are not Christians because they do not follow our tradition. Moreover, they are lazy bums who don’t mind their own business. I command you in the name of Jesus Christ to stay away from them so that they don’t infect you.’ This teaching on not following the ways of evildoers is a teaching found in every book of the Bible, but is also a teaching that is lost on a Church today; a Church that only wants to appease the world and to appease sinners, so that they will like us and not think that we are judging them.

Yet, setting God’s peculiar People apart from the world is precisely what the Church is doing through the liturgy. To this particular sacred space for everyday of the year, except on Good Friday, the Church calls Her children to retreat into the care, mercy, and healing of Christ Jesus who intends to fill us up with everything that the Father has given Him, so that we might be like Him in the world to which we will reengage. Through the liturgy, our mere humanity receives its share in the divinity of Christ Jesus, so that we might share His divinity in a world that desperately needs to know Him.

While Jesus was still teaching in the Temple area, He heard some people speaking about how beautiful the temple was; how it was “adorned with costly stones and votive offerings,” cites the text from today’s Gospel Reading from Luke 21:5-19. To which Jesus, the consummate party-pooper officiously interjects, “All that you see here – the days will come when there will not be left a stone upon another stone that will not be thrown down.” Anxious, as people are, to know when the end of the world is coming, asked, “Teacher, when will this happen.” Jesus then went to tell them that it will not be coming when people come claiming to be Him and announcing the last days. It will not be immediately the end when you hear of wars and insurrections. Jesus then describes things such as global wars, earthquakes, famines, plagues, and awesome sights and mighty signs from the sky as indicators of when the end is nigh. Yet, seemingly to dismiss, altogether, the question of ‘when is the end coming’, as if it that not what actually matters, Jesus turns to explain what does matter. What matters is what the prophet Malachi taught – preserving in the fear of the Lord, and what the Apostle Saint Paul explained – avoid evildoer and follow the tradition. These things are essential to our faith, because long before those signs of the end being near comes, those who follow Christ Jesus will be hated because of His name. We will be seized and persecuted and handed over to the religious establishment and to prisons. We will be handed over by those closest to us and some of us will be put to death. Yet, just as it was promised in Malachi that those who fear the Lord will rise, so too does Jesus promise, “not a hair on your head will be destroyed. By your perseverance you will secure your lives.”

Persevering in our Baptismal calling to love to serve the Lord is challenging, especially so in a world that is becoming more and more hostile to Christianity and in a Church that is becoming more and more hostile to those who remain rigid in following the tradition handed down the Apostles. Yet, it is the liturgy that keeps demanding of us to stay the course, keep coming into the Lord’s sacred space, keep processing towards Mount Calvary, keep confessing Christ crucified, keep praying in Jesus’ name, keep the Scriptures in our head – on our tongues – and in our hearts, keep offering our work of human hands, keep lifting up our hearts, keep our eyes on the Cross, keep your communion with God and His People, and keep being a Eucharistic People in the world.

This is just one way how the readings at Mass this Sunday connect to the liturgy and how the liturgy is forming us how to live our lives in the world. Be in the world what you have received through the liturgy. 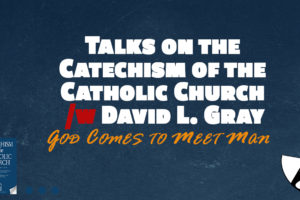 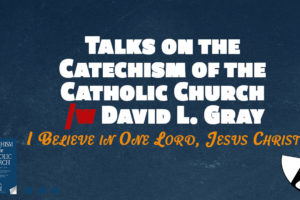 I Believe in One Lord, Jesus Christ (Paragraphs 422 – 682 of the Catechism of the Catholic Church w/ David L. Gray) 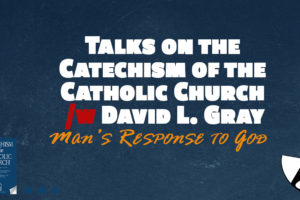 Man’s Response to God (Paragraphs 142 – 184 of the Catechism of the Catholic Church w/ David L. Gray)

Latest Reflection on Readings at Mass

After 6 weeks in wonderful 🇨🇦 and tearful farewells to our incredible surrogate & friend, it’s time to go home to Lisbon with our new family member: our most beautiful hand luggage. Canada: you are a shining light of democracy & equality. Thank you for letting us fulfil our dream

I have never seen anything this brave before! We are truly progressing!